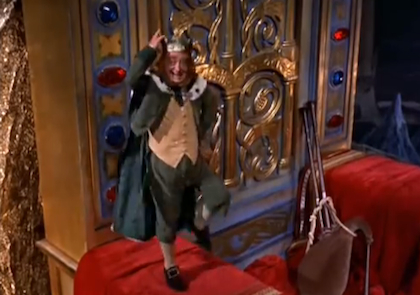 Erin Go Bragh to all of you, and I hope that you are all planning to wear green today (or else you will get pinched)! St. Patrick’s Day is upon us, and I have decided to celebrate by writing about one of my all-time favorite guilty pleasures: Darby O’Gill and The Little People.

Made in 1959 by Disney, Darby O’Gill features a young singing(!) Sean Connery, drunk leprechauns, a raging leprechaun party, and a banshee. In short, the film is completely insane -- and I absolutely love it. The plot centers around Darby O’Gill (Albert Sharpe), an aging caretaker in charge of Lord Fitzpatrick’s estate in a small town in Ireland. He lives with his stunning daughter, Katie (Janet Munro), and spends most of his time in the local pub drinking beer and regaling the town with his adventures with the leprechauns (as most Irish men do, I guess). One day, Lord Fitzpatrick demotes Darby to part-time caretaker (I wonder why) and hires a strapping young Irish lad named Michael (Connery) to take over.

All of this is somewhat plausible... until the actual Leprechaun King Brian kidnaps him and brings him to Leprechaun Mountain to avoid the shame of telling his daughter about his demotion. Darby retaliates by playing “The Fox Chase” on a violin, in which the leprechauns leap and dance around as though he has slipped them ecstasy, before mounting little white horses to embark on a fox hunt. This scene has absolutely no point whatsoever, and drags on for longer than necessary -- it is literally a bunch of leprechauns leaping into wine buckets. At no point does Darby find any of this strange, but then again it’s never stated how much Darby had to drink at the pub before meeting up with the leprechauns. I do find this scene to be great fun, and I have to say that Darby sure can slay a fiddle! Watch and see how wonderfully wacko it is for yourself:

After the leprechauns hold a party that looks like something from The Hangover, King Brian realizes that Darby has tricked him, and the two engage in a battle of wits over a jug of poitin. I really have no pity for King Brian when he is captured by Darby, who, of course, would win in a drinking contest -- the man hasn’t been sober since the first few minutes of the movie -- and question how on Earth you can get into a battle of wits over a jug of poitin. I’m fairly convinced that the writers decided that if Darby didn’t drink again soon, he would sober up and the movie would become a lot less fun.

With King Brian now captured, he’s forced to grant Darby three wishes, and this results in more drunken rambling and debauchery. King Brian appears to Katie and Michael in their dreams (thanks to a wish by Darby) in what is not the least bit creepy or disturbing. The best part of this is that we get to hear more of Connery’s deep voice trying to do an Irish accent; luckily, he clearly did not care whatsoever:

Of course, there has to be some romance in here; this is a Disney movie after all. So Michael and Katie flirt and awkwardly fight one another. Of course, there is another Irish lad, whom the character of Gaston from Beauty and the Beast may be based after, vying for Katie's affections. There is much intrigue and Irish men trying to do each other in before Katie injures herself and a banshee comes from her. That’s right, a banshee. So, Darby does the honorable thing and asks for the banshee to take him instead. Then King Brian does some sort of leprechaun trick so that they can both live, and all is well. Before Katie and Michael sing of their love to one another, Michael gets into a brawl with his rival at the bar, who has literally dumped whiskey on him (I’m pretty sure Darby wasn’t too happy about that whiskey being wasted). Michael retaliates by doing what any good Irish lad would do: knocking his rival out cold and leaving in a love carriage to sing to his sweet lass. I actually really like the song the two sing (“Pretty Irish Girl”) and to this day it fascinates me to see Sean Connery sing:

I personally adore this film. What other Disney film has a bunch of leprechauns dancing into vats of wine? Or a banshee coming to take someone away? Or, better yet, what Disney film has a lead character who is perpetually wasted? (well, besides everyone in Alice in Wonderland...) I do enjoy that the film tries to claim that Darby is merely “full of blarney” rather than “full of whiskey”, and that the film makes no attempt to steer clear of Irish stereotypes whatsoever. Perhaps that is why this hidden Disney gem has been quietly forgotten, but I hope that it will one day have a comeback -- this has got to be one of the weirdest films ever made by Disney. If the leprechauns aren’t enough to interest you, than a strapping young Sean Connery should be. After all, this is one of the films that caught the eye of the James Bond producers!