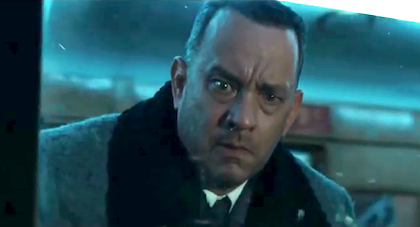 When the time comes for another Steven Spielberg film to be released, I always liken it to Babe Ruth approaching home plate and indicating with his mighty bat that he is about to knock the ball into the next stratosphere. To me, and to many other cinephiles out there, Spielberg has easily earned the status of “living legend”, and as such, whenever he decides to actually make a movie (his project list is approaching biblical length), it is no mere casual thing but an event to be celebrated. I mean, come on, the man made Jaws, Close Encounters of the Third Kind, and Munich, so I can be somewhat forgiven if I tend to gush about him a little too much.

Well, on October 16, the whole world is going to get a chance to do a little gushing of their own when Spielberg’s latest film, Bridge of Spies, hits theaters. The fact that it has Mr. Spielberg carrying out directing duties is reason enough to celebrate, but he’s brought some extra firepower in the form of Tom Hanks (his leading man for such previous films as Saving Private Ryan, Catch Me If You Can, and The Terminal) as the film’s star and the Coen Brothers, who worked on the script. So we have the man who brought Indiana Jones to life, an actor who can practically turn any film role into a Oscar fodder, and two writers/directors who tend to push the boundaries of storytelling with nearly every movie they make. Are you excited yet? Well, if not, you should go ahead and watch the trailer below, and I’ll go ahead and be excited for you in the interim.

I believe that beyond the blaring triumphant music and multiple shots of people in suits running away from other people in suits (nothing wrong with these things but they are fairly common when dealing with this type of film) lies a thoughtful and meaningful story about the moral obligations we feel that we, as nation of freedom, have. I was not alive during the peak of the Cold War, so I cannot pretend to completely understand the paranoia and anger that people felt during that particular time in regards to a foreign power seemingly trying to infiltrate our homes. But we live in trying times now, so the world of the film is not entirely alien, and the lessons it may be trying to teach, in regards to leading by peaceful example and seeing your enemies as human beings, are not buried under so much nostalgia that they’ve lost their worth. Steven Spielberg is not in the habit of making idiotic movies, and Tom Hanks is not in the habit of starring in them... Maybe back in the '80s, yes, but certainly not at this point in his career. I don’t pretend to understand the full scope of this movie and its message at this time, but I cannot wait to see it unfold up on the big screen, as we desperately need reminders about our past and the positive things we were, and still are, able to accomplish, just as much as we need quality films to entertain us for a few hours out of the day. I don’t want to say too much more for fear of jinxing things, and somehow Spielberg’s joke cut of the film makes it into theaters instead of another example of his masterful filmmaking. I don’t know what that joke cut would consist of, but I can only imagine that it would contain a bathtub falling through the ceiling in the middle of the trial and Hanks laughing maniacally at it.

All kidding aside, though, I urge you to get excited for this latest Spielbergian romp through history and mark October 16 on your calendars. It’s going to be a very good day for cinema.