Spicing Up the American Music Awards! 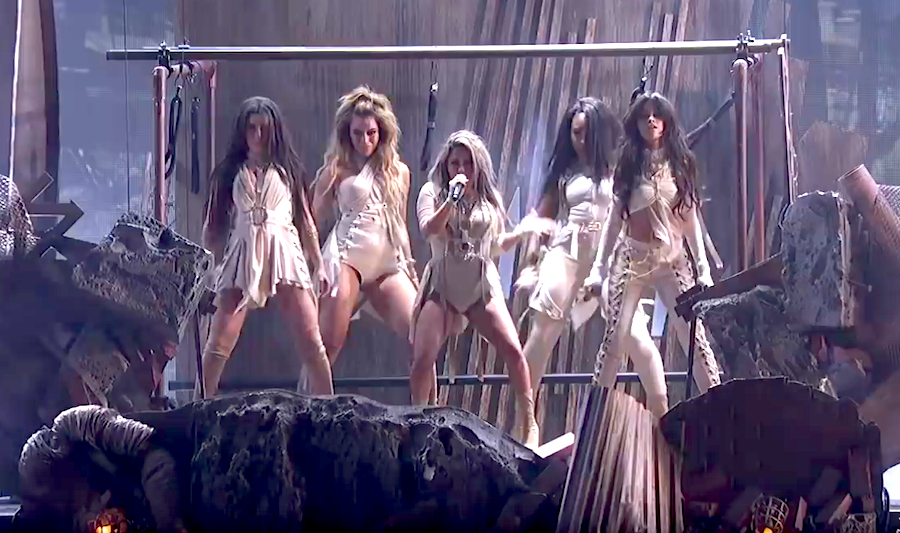 Full disclosure: I have absolutely no training or background in producing award shows. I’m just a lowly fan and commentator who has ideas he’d like to share about an annual awards ceremony that he enjoys!

The most recent edition of the American Music Awards didn’t exactly hit its highest note in terms of ratings, but that doesn’t mean all is lost. The AMAs are still an enormous deal in the industry and a huge cultural event, and I want to make sure they don’t slowly slide into oblivion like the Daytime Emmys seem to be doing.

To accomplish this goal, I have two intertwined ideas that depend on each other to work.

Everyone’s already heard the song and seen the music video, so award shows are a time to reimagine these modern masterpieces for the stage, and there’s no better example than my 5H girls slaying. The intro alone is enough to garner interest, as the sparkling quintet descend from the ceiling to the stage in a broken-looking contraption, which perfectly blended with the ancient ruins environment that the rest of the set was vibing off of.

This was easily one of the more notable performances of the evening, so the AMAs have proven they can do it. They just need to do more of it. Since the AMAs aren’t as video-focused as the VMAs, or as wide-ranging in terms of genre as the Grammys, they can really hit its niche by being the award show that turns a song into a memorable visual performance.

But Know When To Use It!

Lady Gaga’s performance of “Million Reasons” was beautifully done, and focused completely on her sound and the potent words in the song. Large productions are great and there should be more of them, but the AMAs need to make sure to use them properly. They really nailed Gaga’s, giving her a raw performance with not a ton of distractions for a deep song, and let her shine like the superstar she is.

A song like “Side to Side”, which is catchy and I’m obsessed with but doesn’t necessarily boast emotional lyrics, should’ve had more of a performance added to it, not just a few sexy dancers with fake palm trees in the back.

I think the AMAs can really recapture their fire by knowing when to use the magnitude of giant productions to bolster the earworm pop songs that we all know, while letting the more unvarnished songs stand on their own, as if the artist was baring it all just for us. I have faith that the awards can do this as it already has a fair handle on it, but if they can really get a grasp on this, the award show’s ratings will be music to ABC executives’ ears!