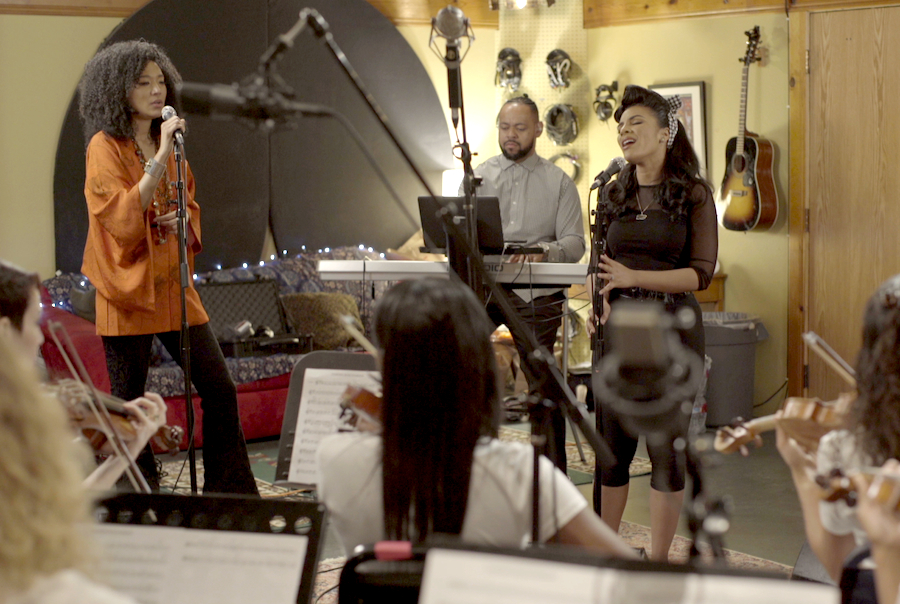 Let's face it, there's no shortage of female empowerment anthems out there -- and that's a good thing! But when four talented soul singers who also happen to be best friends collaborate on one such anthem, the message of lifting up other women becomes that much more authentic and powerful!

Such is the case with "SHE", written by Crystal Starr and performed by Starr, Andra Day, Judith Hill, and Kyra Dacosta. The fierce foursome recorded the track live with a string orchestra, and the effect is breathtaking!

We had the pleasure of speaking with Crystal to learn more about what motivated her to write this song and how the collaboration came together!

YH: What inspired you to write your new song "SHE"?

CS: When I started recording and writing all the songs on my album, it just turned out that they're all true stories of my life…every story is a true story of my life. "SHE" was the last song added to the album, and it just kind of came about. Every song on the record is about the women in my life -- myself, my mom, my best friend. When I was coming up with the last song on my album, it just so happens that "SHE" just stands out because it just sums up everything, the strong women in my life. The strong women that are out in the world. "SHE" basically sums it all up.

YH: How did you decide on who you wanted to feature on this?

CS: It was mostly about character. It had nothing to do with name or anything like that. Andra, Judith, and Kyra are some of my closest friends. They're my best friends. They're all about the work, they're not about the ego. It was important for me to show women that what's important to us and to each other. We've all been through something in our life and we've been there… it doesn't define us and just makes us stronger. Those are the women in my life that I know of speak from truth and not from egos. When I'm going through something, the person I call are them. I wanted that truth to remain in the song.

YH: Tell us how you approached each one of them and their initial reaction.

CS: I talked to them all at once. We might have been in a festival in New Orleans and I talked to them about it. It was a no brainer. Part of the reason why I called them is because they're great leaders. And to be a great leader, you have to be humble and selfless. Because of the selflessness and humbleness of each one of the girls, we were all super excited to say yes to doing the song. It's not about me… it's not about each one of them... it's about us putting the message out there that women can support and uplift each other. That's how we are in life. We love each other so much!

YH: How did you meet Judith Hill, Andra Day, and Kyra Dacosta?

CS: With Kyra, we starred on Broadway together in Baby It's You and we played The Shirelles. We just hit it off. Our relationship is based out of laughter. She's one of the funniest people I've ever met. Andra, I met her a few years back. We had a show in L.A. together. This is before her album came out and we instantly became sisters. From that day, we've been inseparable. She's such a great, loving, giving person. Such a beautiful person. Judith, I met her at the Never Again Peace tour at the Greek Theater and I had just gotten off of Broadway then and was asked to open up for Stevie Wonder. I met her and instantly she became one of my really close friends, and I asked her if she would sing at my Christmas show, A Crystal Starr Christmas, which is a benefit for foster children. The cause is important to me.

YH: Any behind-the-scenes stories you'd like to tell us while filming "SHE"?

CS: The thing with us girls is that everything is a comedy. We laugh at each other's stories. The way that we are, every moment is funny. Everytime we are together, there's always something funny going on. We're all loud and hilarious! We have our own language and it's so funny!

YH: What's the message you want people to take away with after listening to "SHE"?

CS: I want people to lift up other women. To love. Realize our strength. The women that came before have accomplished so much -- Maya Angelou, Harriet Tubman, Queen Elizabeth, Cleopatra, Misty Copeland... They've all gone through so much and overcame.

YH: What kind of advice would you give an aspiring artist?

CS: You are your own fingerprint. Never allow anyone to tell you who you are. This industry is based out of people telling you you should do this, you should do that. It's so important to stay true to who you are. We each have a fingerprint. Keep Growing. There's uniqueness to everything. Keep getting better. Keep practicing and never give up, no matter what you do. There may be times when you get discouraged and that's okay.

YH: What's next for you?

CS: I'm starting a non-profit organization called Little Voices to uplift women and children. For anyone who never felt they had a voice, I was that girl. I was the youngest of three and never felt like I had a voice. I was the person who would be in class and the teacher would say "Okay, who has a question" and I would never raise my hand and was afraid of the backlash of what people might say about me. Little Voices is about teaching you that you do have a voice.