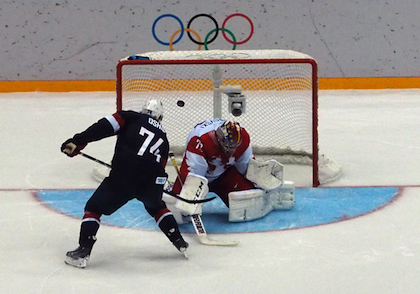 The 2014 Winter Olympics have come to an end, and it was a huge roller coaster of emotions, but ultimately Sochi, Russia, put on a great show.

The Games are a whirlwind, yet those seventeen days felt like a lifetime. Like I said before, it was full of high highs and low lows, especially for Team USA. Champions were made and hearts were broken. But for all the disappointments (not to mention broken down bathroom doors), let’s take some time to remember some of the most memorable high points in Team USA’s Sochi games!

Meryl Davis and Charlie White dominated Ice Dancing and brought home the Gold for the U.S, the first ever for us in this event. After taking home Silver in the last Winter Olympics in Vancouver, they came back with a new sense of focus and dedication. Their dance was flawless and their hard work paid off.

Ligety redeemed himself from the Vancouver Olympics by winning the Gold medal in Alpine Skiing Men’s Giant Slalom. After winning the Gold in Turin in 2006 in the combined event, he was a big contender in Vancouver, but he came up short. He returned to Sochi with a new focus and found redemption.

This is the first year that Women’s Freestyle Skiing Halfpipe was included in the Olympic games. Sarah Burke, a phenomenal Canadian freestyle skier, advocated for the inclusion of Women’s Halfpipe and dreamed of competing in Sochi. However, a tragic training accident occurred in 2012 and Sarah past away. Athletes remembered her in the games as volunteers rode down the halfpipe in the shape of a heart in her honor, and her ashes were skattered around the city. Burke paved the way for 20-year-old American Maddie Bowman to take home the Gold.

This 18-year-old became the youngest person to win the gold medal, in Women’s Slalom. Her maturity is definitely found in her skiing and athleticism. She had a great first run, but the real excitement was in her second. She came up on a huge bump but composed and corrected herself and still came out with the fastest time, winning the Gold for Team USA. She is only beginning her Olympic legacy and she is sure to come back for more in the 2018 games in South Korea!

Sage won the first ever Gold medal in Men’s Snowboard Slopestyle, but it’s his sense of humor that’s got everyone talking, from his bacon medal and his iconic picture mimicking Kate Upton to his memorable appearance on "Conan". Like a bawss!

Although Hockey was a huge disappointment to Team USA this year, Oshie came quickly became a household name when he carried his team to put up a fight against Russia. He capitalized on four out of six penalty shots, playing like a true champion. I’m sure the St. Louis Blues are excited to have their hero center back on the ice!

Let’s not forget the beauty that was uncovered at the opening ceremony. Yeah, the fifth ring had some technical difficulties, but the Russian Police Choir stole their show with their rendition of Daft Punk’s hit, “Get Lucky”. Should we watch it again? I think YES.

It was a great time, Sochi! Thanks for all the memories! See you at the next Olympic games in South Korea in 2018!