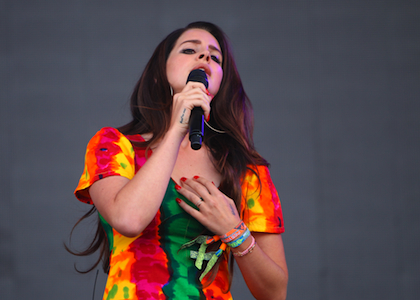 LIVE FAST. DIE YOUNG. BE WILD. HAVE FUN.
These are the words uttered by the solemn, whimsical beauty that we all have come to know as Lana Del Rey.
Her sound is a blood-red lipstick stain on a discarded cocktail napkin and it drips with nostalgia for a time and place that we've come to know only through black and white cinema and our grandparents' old record collection. Although these items are not necessarily from our own time, the memories and references they hold are strong enough to transport us into the past.
The former Elizabeth Woolridge Grant has become a human portal into the time of classic Hollywood glamour, allowing us access to the days of Marilyn Monroe, Elvis Presley, and Jackie O without having to actually lived in that era.
She now serves as a relic to this bygone society as the widely known Lana Del Rey, but the road to success has been far from easy for her. It comes as no surprise to devoted fans that Del Rey's music career is not a recent endeavor. She signed her first record contract 5 Points Records as Elizabeth Grant and later started recording under the name Lizzy Grant.
If you're curious to hear Lizzy Grant's sound, check out two of my personal favourites, "Raise Me Up" and "Pawn Shop Blues", below:
In 2010, she gave birth to her muse. "I wanted a name I could shape the music towards. I was going to Miami quite a lot at the time, speaking a lot of Spanish with my friends from Cuba - Lana Del Rey reminded us of the glamour of the seaside. It sounded gorgeous coming off the tip of the tongue," she shared with Vogue UK in 2011.
Del Rey's activities as of late involve befriending James Franco (whom she once revealed as her celebrity crush), working with Brian Wilson (of The Beach Boys) on his forthcoming album, gracing the cover of Rolling Stone Magazine, and hinting at a possible Ultraviolence tour in 2015.
Lana Del Rey is unapologetically herself, and part of that is taking all of her life experiences and owning them as part of the journey.
Just like other artists, Del Rey uses her music as an outlet to discover herself, her journey, and who she truly is. Elizabeth Grant is rewriting her past as Lana Del Rey. She serves as a voice for the untold stories of sadness and heartbreak -- which are far from glamorous and aren't often addressed in the music industry today. What makes the urban princess so unique is her gift to speak to an entire misguided generation of people who are constantly on the search to discover their own identities, which often leaves them conflicted with accepting their own life experiences and molding that into who they are today.
Lana Del Rey now has another record under her belt, Ultraviolence, which debuted at #1 in twelve countries, despite her prior hesitation to continuing her music career, and despite her record label's initial dissatisfaction with her album. Ultraviolence possesses this underlining theme of bittersweet heartbreak and unequal love etched into the core of every track, echoing the themes of her previous albums -- but this time with a raw and darker sound.
Although Lana Del Rey may be using a stage name, she has clarified the meaning she attributes to this name. As people with passions in many different areas, we each have a muse that ignites these particular passions, whether it's a person, a place, or an idea.
Frequently referred to as a "self-styled gangsta Nancy Sinatra" and "Lolita lost in the hood", Lana Del Rey has maintained this urban persona and matured it in Ultraviolence. What started off as a concept for her music has developed into a full aesthetic that teaches us it's okay to be crazy -- because it is then that we are free.
(Photo via WENN)
- Darlene Melendez, YH Staff