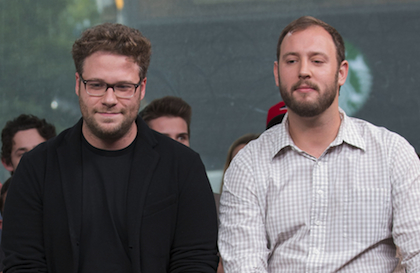 Just when you thought that Seth Rogen and Evan Goldberg, the minds behind Superbad and This is the End, couldn’t get any amazingly nerdier, they make this announcement: the pair’s next film will focus on the long-standing rivalry between video game giants Sega and Nintendo. Console Wars will be a comedy based on Blake Harris's forthcoming book, Console Wars: Sega, Nintendo, and the Battle that Defined a Generation. The book will chronicle the bitter corporate feud between the two. Who knew that video game companies could get so nasty?

In addition to Console Wars, Rogen and Goldberg have a few more projects in the pipeline. They will collaborate with their longtime buddy James Franco on two, including The Interview, which follows Dave Skylark (Franco), a talk show host, and his producer, Aaron Rapport (Rogen), as they embark on a journey to interview Kim Jong-Un, dictator of North Korea. Their plans get a bit more complicated when the CIA asks them to murder him. The other project is an adaptation of Greg Sestero’s The Disaster Artist, which tells the tale of how the cult film The Room was made. (I’ve read it. It’s hilarious. Go buy it and read the book immediately.) Rogen and Goldberg are also currently working on an animated film called Sausage Party as well as a television adaptation of the graphic novel "Preacher" for AMC.

Because I am a giant nerd, I plan to go out and buy Console Wars the second it hits bookstores, as well as watch the film. I think that this project will be right up Rogen and Goldberg’s alley, and I look forward to seeing who they will cast as the presidents of Nintendo and Sega (Michael Cera has to be somewhere in this film, right?).

Are you excited for Console Wars?