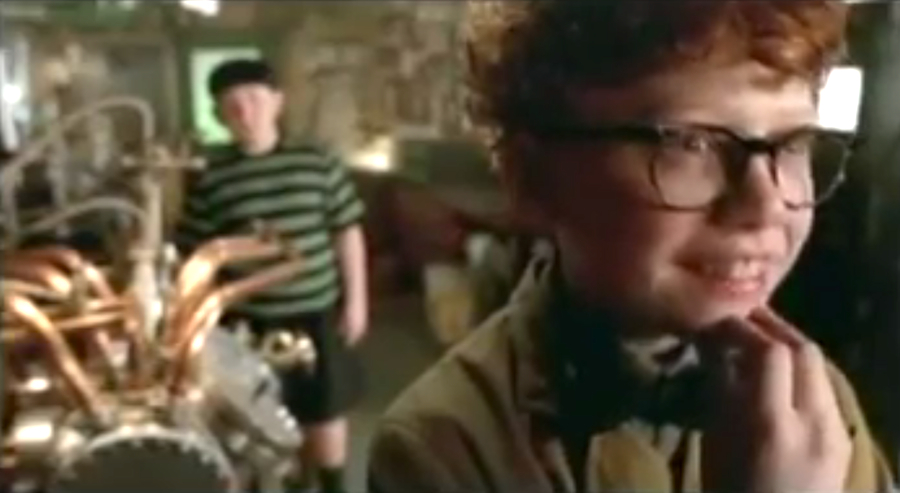 On paper, Thunderpants sounds like it’d be a movie that you’d forget as soon as you saw it. The story follows a young boy named Patrick Smash who dreams of being an astronaut, but his main problem holding him back is that he’s constantly farting and they smell particularly bad. His only friend in the world is a science whiz who was born without a sense of smell named Alan A. Allen. As you can guess, Allen is ridiculed at school for being a nerd; however, Patrick gets even more vicious torture at the hands of the bully because he has a severe medical problem. Thing change when the U.S. government needs the help of Patrick’s “ass” (as the character puts it) in order to power a rocket ship on a solo mission to save a group of stranded astronauts. But enough of giving you the baseline plot, let’s see what in fact makes this film stand out. From the director of Bill and Ted’s Bogus Journey I give you the trailer to Thunderpants:

Yup… that’s Rupert Grint! Ron Weasley himself plays the kid with the laziest name in Hollywood history, Alan A. Allen. But what is fascinating (absolutely fascinating) is the rest of the cast. You have respected British comedian Stephen Fry, respected British actor Simon Callow (similar last name to the “American Idol” guy), respected American actor Paul Giamatti, the guy who was forced to “squeal like a piggy” in DeliveranceNed Beatty (I can’t see him any other way after that… don’t watch), and going uncredited in the cast list with one line in the film is Keira Knightley, who must’ve gotten famous after this was filmed but before it was released because she is listed in the “Special Thanks” portion. (Josh Henderman, who also appeared in Harry Potter as Goyle, is the school bully.)

Outside of the casting is the sheer master class of filmmaking this total U.K. box office bomb displays. The movie was silently released in the U.S. after performing so poorly in the U.K., but obviously the U.S. distributor, The Weinstein company (groan), saw dollar $igns in Grint’s name enough to release it straight to video to bank off of. Nonetheless, Thunderpants has somehow survived to make its way into my late-20s eye sockets and I have to say… it’s darn impressive.

The fact that Thunderpants took a basic premise of a kid who farts so terribly it causes woe and dismay for all those around him who can smell and make it watchable is collosal perfection. I have not seen such precise, entertaining, and different storytelling since 2001: A Space Odyssey. I mean, Patrick’s farts as an infant are so horrendous that it causes a chain reaction of familial problems (and forced Stanley Kubrick to roll in his grave after my statement) where his father abandons the family and his mother falls into alcoholism… if that is not on par with the monkey person in 2001 throwing a bone in the air where it twirls until Stanley Kubrick dissolves the shot into a space station, thus detailing the advances of humankind from primitive tools to sophisticated ones of the future, then I know as much about film and storytelling as the casting people for Thunderpants knew about casting when they only saw Keira Knightley talented enough to play the role of “Music School Student” in a film about a kid with gastrointestinal problems.

What makes Thunderpants so watchable is the fact that, while it is about a kid who farts a lot, they really only roll with that premise in the beginning of the film. Sure, he lets some extreme toots out over the course of the film, but it has a total of fifty farts to count (and at least one body), and somewhere between 65 and 75 percent of them are in the first 20 minutes of the 87-minute run time. That shows you that, when it comes to fart jokes to this frequency, the best way to pull them off is PACING. Even if you watch South Park: Bigger Longer and Uncut, they put the farts of Terrence and Phillip in full force at the beginning of the movie during the musical’s second song, "Uncle F#cker", and then afterwards they give the characters and audience time to breath before pumping them full of gas again.

The mathematics behind fart jokes aside, Thunderpants also shows us how to effectively tell a story without overbearing audiences with a plot. It reminds us that not all movies do plot-heavy blockbusters with a hero who needs to solve an antagonistic problem inside and outside of them. Some movies are just a series of events that set off episodic reactions for us to enjoy watching a character go through, like Ladybird or The Jerk. Sure, there is a plot to this film involving Patrick needing to save astronauts with his farts, but it comes later on. Just like my favorite sports film Goon, it’s about a protagonist who was born with a skill that they never really found useful, but then they find a good use for said skill, and by the end they themselves aren’t exactly changed. Their status may have changed and they are happier feeling accepted, but they as a person aren’t any different because they never really needed to be. They’re both perfect in their own flawed ways, but nothing about these two characters is or has ever been threatening or harmful to others. It’s really the people around them, in these cases, who have the problem of not being able to accept our main character’s flaws… aside from the best friend characters in each of these films, who are ultimately the ones to encourage the main characters to use their skills in a way they never imagined before.

My final thoughts on Thunderpants would be that you should watch it with a group of friends and not tell them anything about it. If you’re able to get a DVD, it’s also advised that you watch every decade-spanning trailer beforehand to make yourself really question just when this was released.

Fun fact: On an appearance on “The Tonight Show with Conan O’Brien” on January 24, 2011 (according to Wikipedia so take it or leave it), Paul Giamatti said that making this film was one of the high points in his career. Sarcastic or not, if you watch him as he plays Johnson J. Johnson, even when he’s in the background, you can see how absolutely and hardcore serious he took this role.