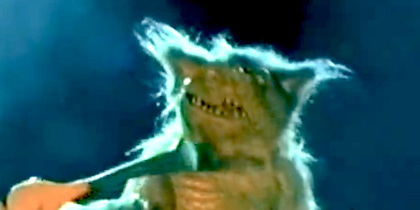 Back by popular demand, I present to you the latest in my Scary Movie Guilty Pleasures series: Hobgoblins. A blatant rip-off of the classic Gremlins, Hobgoblins shot to the top of the world’s most notorious films list after being featured on an episode “Mystery Science Theatre 3000”. This isn’t much of an exaggeration -- Hobgoblins features some of the most cringe-worthy dialogue and archetypes I’ve ever seen. It is so bad it is literally impossible to not enjoy it.

The film opens with two security guards: one trying to grow a pair of caterpillars on his face and a young guy who resembles a dead fish guarding an abandoned film studio. Both are dressed in Ghostbusters uniforms bought at Goodwill, when the dead-fish guard stumbles into a “rock fantasy”, where he hobbles around the stage like a wounded Patrick Swayze. Shortly after, caterpillar-face guard finds dead-fish guard actually dead. This all occurs in the first five minutes, and it’s amazing.

Following the first (and only!) death of the film, Caterpillar Face is informed by his boss that he must hire a new guard to replace Dead Fish. In enters the meek and pathetic Kevin, our hero, who is impressed by the miniscule gun that Caterpillar Face presents to him. Kevin is informed by to never enter a certain vault, so it’s certain that in the next five minutes, he will enter it. We later meet Kevin’s motley crue of friends, which includes Daphne, a slutty reject from an '80s Madonna video; her boyfriend, Nick, a non-union Rambo; the virgin Kyle, who is so eager to get laid he constantly calls a sex line (976-SCAG -- I am not making this up); and finally his prudish girlfriend Amy. Daphne immediately introduces herself by stating, “My boyfriend would never bring me a tape without a single X-rating,” while her boyfriend shows off a series of guns and grenades for no apparent reason. At the sudden urging of Amy, Non-Union Rambo and Kevin get into a battle with garden tools. Yes, you read that right. The scene’s length rivals the Chicken vs. Peter Griffin fights in “Family Guy” but is a million times better. Watching two guys beat one another with garden tools is truly brilliant cinema (enjoy the extra comments from the “MST3k” guys):

Shortly after the garden fight scene (the most dramatic fight scene ever made), Kevin accidentally sets loose what was in the vault -- hobgoblins! These little critters resemble skinned koalas covered in your grandpa’s chest hair, and they give people brilliant fantasies that eventually kill them. The hobgoblins are attracted to bright light (in direct contrast to their predecessors, the gremlins), so they immediately attack Kevin’s friends, who are having the saddest disco dance party ever filmed. As the hobgoblins attack, Daphne flashes her hoo-ha at them (so that, ladies, is how you handle a hobgoblin) while Kyle meets his fantasy, Fantasia, who looks as though she is covered in STDs (perhaps that’s what he is into...?). She takes him to “Reputation Road”, where she attempts to kill him by pushing his car off a cliff. I’m fairly certain that Kyle completely ditched his sex-ed class, as he assumes that a woman trying to push his car off a cliff is giving it to him. Poor, virginal Kyle. But really, if you’re that naiive, you deserve to get your car pushed off a cliff:

Amy is the next one to have a fantasy, where she transforms into a sleazy stripper wearing what appears to be black dish towel on her head. Amy isn’t even remotely sexy, but that doesn’t stop the strip club’s bouncer, Road Rash, who is clearly a gorilla in human clothes, from taking a shine to her. Her friends come to her rescue (because no one is allowed to get laid in this film except for Daphne), Non-Union Rambo transforms into Actual Rambo and blows the entire place up. Rambo’s faux attack may be my favorite scene of the entire film, as he hurls grenades into the air like confetti and somehow survives taking a full grenade to the face:

Hobgoblins is, in my opinion, a treasure. I always appreciate a film that is such a disaster you can’t help but love it. There is no way in hell that director, writer, and producer Rick Sloane actually meant to make a good film -- but he did succeed in making something genuinely entertaining, even if for all the wrong reasons. And there are so many more hidden gems from the film I didn’t get to mention: Trixie the stripper donning a rat nest on her head; the creepy man in red who attempts to emulate Pee-Wee Herman; and Caterpillar Face’s boss, who is concerned with the studio’s insurance. Do yourself a favor and play Hobgoblins during your Halloween party. Play the "MST3k" version for extra laughs!