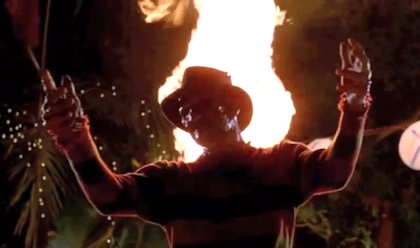 It turns out, pretty gay, yet unintentionally so. The beginning of the film starts out pretty tame, with a group of kids on a school bus. I was most intrigued by a fat kid who resembled a rejected member of the Weasley family (or the cousin they just don’t talk about, Cousin Hubert) carrying a giant boom box and rocking out in the back. The Weasley Reject is easily the best actor in the whole film but is sadly gone after only two minutes. Freddy Krueger eventually takes control of the bus and its less-interesting passengers, where he traps them in a “canyon” that was built for like five dollars (maybe six -- they did have red lights, so that would have cost an extra buck). The canyon deaths are later revealed to be the dream of this film’s hero(?), Jesse, whose family has moved into the former house from hell on Elm Street. And this is where it gets kinda gay...

Throughout the film, Jesse appears shirtless in nearly every other scene and in his tighty-whities in nearly every scene. He later dons sparkly gold Kanye West  classes and dances around his room to period-appropriate '80s synth pop. The camera zooms in on his sexy booty and pelvis as he gyrates around the room in one of the most fabulous dance numbers ever caught on film:

As the film progresses, we see that Jesse’s best friend, Grady, is clearly in love with him. And not only Jesse’s best friend, but Jesse’s gym teacher, as well as, sadly, Lisa, a sweet girl with no gaydar. During a baseball scene, Grady rips off Jesse’s pants and wrestles with him on the baseball field. I don’t know about you, but I have yet to go to a baseball game where one of the players ripped off another players' pants and rolled around with him in the dirt. If YOU have, though, please let me know where this happened because I want to go to that baseball game. Sadly, I could not find a clip of this scene, so you will have to use your imagination for now.

Oh yes, the plot! Well, Freddy Krueger possesses Jesse and has him kill people for him, or, as he puts it, “You’ve got the body, I’ve got the brains.” In one of these kill-dream sequences, Freddy takes Jesse to the gayest of gay bars. This bar is like something Stefon from “SNL” would describe. It has everything: Purple-haired lesbians, gym teachers who are into S&M… After wandering around for a bit, Jesse’s bondage-lovin’ gym teacher takes him back to the showers for a little fun, where a sentient jump rope ties him up, and his bare booty is spanked by towels before he dies. Now THAT is kinky, folks.

I’m not sure if the filmmakers were aware of just how homoerotic the film was or not. You have to give them credit for making a film that was a metaphor for coming out in the 1980s, but you also have to laugh at how ridiculous this attempted metaphor was. Lisa is the one who eventually “saves” Jesse, leading him into a life of deep, sexual confusion. There isn’t a single scary moment in the entire film, but that’s what makes it so wonderful. It’s definitely one to watch this Halloween for its absurdity.

And bless the soul who created this compilation of the best scenes from A Nightmare on Elm Street 2 (slightly NSFW):