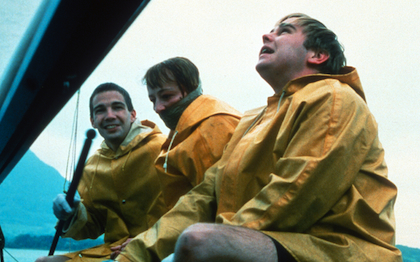 For me, a good horror movie makes me question myself: how could I enjoy something so twisted and bone-chilling? Or is enjoying something of the fare at all normal? And these movies are made much more entertaining when they have us chomping at the (sweet) bit. In honor of the spookiest of holidays, I have selected a few of my favorite scary flicks that I deem essential to any horror movie night and paired them with must-eat treats!

This stage-to-film picture is one of the greatest suspense films I’ve ever seen, starring Audrey Hepburn and Alan Arkin, and directed by Terence Young. A trio of menacing crooks devises a series of machinations to retrieve a heroin-filled doll from the apartment of a "World Champion Blind Woman" Audrey Hepburn. What unfolds is a meticulous, tension-building thriller leading up to the brilliant final eight minutes – a climax so shocking, Stephen King heralded it the most terrifying screen moment of all time. This role earned Hepburn her 5thAcademy Award nomination.

SWEET TREAT PAIRING: Junior Mints. Much of the movie’s drama plays out in the darkness (and blindness) of Hepburn’s New York apartment as it evokes the similar immersion of sitting in the darkness of a movie theater or at home. Just try to keep your cool through the all-consuming suspense by nibbling this classic movie-theater candy – rich and exhilarating, much like that of the film’s tension.

The first movie I’ve seen to adeptly blend horror and comedy, masterminded by Wes Craven and Kevin Williamson. When the fictional California town of Woodsboro becomes a cesspool for raunchy teenage slayings at the hands of the “Ghostface” serial killer, Sidney Prescott (Neve Campbell) and her friends consider the “rules” of the horror movie genre as they navigate their way to survival through the real-life horror they’re suddenly living. Satirizing the clichés of the genre, it’s so humorously meta and pop culture-laden, it’ll have you screaming from both terror and hysterics.

SWEET TREAT PAIRING: Popcorn. Okay, so this isn’t a sweet treat, but it’s a fun pop-in-your-mouth morsel for an entertaining popcorn flick. Tubs of popcorn also make for a nice little homage to the movie’s iconic opening sequence when an agitated Drew Barrymore fears for her life as she’s taunted over the phone by a mysterious caller while making popcorn to watch a scary movie. It’s all very self-referential.

Sinister and unnerving, I deem this one of the best horror films of all time. Influenced by the true story of serial killer, Ed Gein, director Tobe Hooper crafted a menacing and disturbing film experience. Five friends road trip through the backwaters of rural Texas and fall prey to a terrorizing, chainsaw-wielding “Leatherface” and his family of grave-robbing cannibals. The grainy, low-budget cinematography produces a guerilla, documentary-style atmosphere – making the film feel inherently real. It will coax you to the edge of all your deepest, primal fears. Agonizing up until the final frame, this indie classic was hard-pressed to find a distributer because of its gruesome savagery.

SWEET TREAT PAIRING: Pop Rocks. As explosive as the terror, this confection burst its way into becoming an iconic feature of ‘70s pop culture just like the slasher itself. The movie’s “factuality” is an ongoing urban legend, and of course there’s the legend of the boy who exploded after consuming a soda and Pop Rocks cocktail. The crackling from your mouth might help to drown out the petrifying roaring of that chainsaw.

One of the most viscerally and psychologically unsettling movies I’ve ever sat through, helmed by prolific Japanese director Takashi Miike. A lonely, middle-aged, TV-producing widower fabricates an audition for a “film” in the hopes of reinvigorating his dating life. This simple plot reads like your typical romcom, starting off very slowly and very sweetly, but as the narrative progresses, the flick’s budding romance takes a lingering turn into obscurity. As our protagonist falls for the girl, Miike introduces us to her insanity in one of the most harrowing scenes of violence captured on film (by my barometer). Much has been said about the feminist revenge fantasy within the film’s subtext, with its final act being the stuff of every single man’s nightmare – making the movie a blood-curdling assault on the human condition.

SWEET TREAT PAIRING: Twizzlers Pull ‘n’ Peel OR Red Vines. The object of our leading man’s desire swings towards sadism that materializes through piano wire. How she uses the piano wire is totally destabilizing, for the protagonist and the audience. It will completely twist your insides. The Twizzlers are evocative of those piano wires, and trust me – you’re going to need something to grind between your teeth and pull at to control your nerves.

Don’t let the title fool you; this film is anything but funny. It’s brutal, deeply upsetting, repulsive, degrading, and psychologically terrifying. Michael Haneke’s picture is an ironic, darkly satirical commentary on violence in the media and senseless violence per se. The story is simple: two young men take a family hostage in their vacation home and force them into a series of sadistic games and piercing torment. But this thriller is really about how we, the viewers, are complicit in the onscreen violence. Here’s where Haneke violates movie conventions and confounds our conditioned expectations of how events will unfold. Throughout the excruciating ordeal, the fourth wall with the audience is broken, and the baddies interact with us. And just when you think our victims have a chance to heroically avenge their captors, they locate the TV remote from the family’s living room and actually rewind events, thwarting their efforts. All these horrible things are happening because I won't switch it off. Gratuitously violent films get made because we’ll keep paying to see them. The irony here is that all of that violence happens off screen; we only see the aftermath. The movie is relentlessly bleak through to the final act, and like a car crash, you can’t look away – and that’s the whole point.  I actually felt bad after it was over.

SWEET TREAT PAIRING: Cadbury Eggs. The game is set into motion as the two seemingly clean-cut cohorts ask the family if they can borrow eggs; a carton of broken eggs creating an incredibly disconcerting moment onscreen.

A '90s childhood gem if you’re waxing nostalgic, or your Halloween plans consist of hanging with a younger crowd. Executive produced by Steven Spielberg, a greedy heiress inherits the haunted Whipstaff Manor and discovers the house holds fabled treasures guarded by three mischievous ghosts. Afterlife therapist, Dr. James Harvey (Bill Pullman), and his daughter Kat (Christina Ricci), move into the mansion to exorcise the supernatural. But the plan is thrown off course when Kat befriends the not-so-scary titular ghostly nephew of the snarky trio. The movie offers a touching perspective on the experience of loss, flipping the “ghost story” genre on its head.

SWEET TREAT PAIRING: Muddy Buddies (AKA Puppy Chow). This childhood concoction always reminds me of the breakfast scene where the ghastly trio sloppily lap up the meal, ultimately leaving the half-masticated food all over the floor.  It’s messy goodness.

So what’s your favorite scary movie and Halloween treat?