Sarah Jones: Why You Should Stay For The Credits 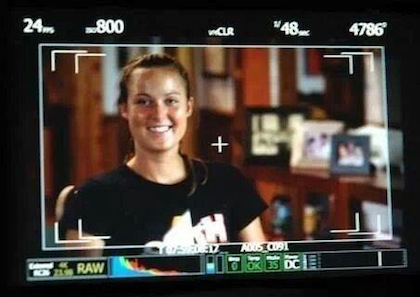 If you have ever sat through the credits of a movie, you know that it takes more than a village to make a film. In fact, it sometimes takes an entire town or city, depending on the budget. But even on smaller films, every single name on that screen is an important cog in a huge wheel, down to the most seemingly minute task. A well-oiled machine needs efficient parts.

We tend to take this fact for granted, as swept away as we are by the pretty actors and occasionally prettier special effects. But make no mistake – that finished product you see on screen was due to many hands, from the cameraman and the set dressers to the script supervisor and the camera assistant. For many of these behind-the-scenes warriors, the only visibility they get among the public is that fleeting white text as the credits roll. But anyone who has been on a film or TV set can tell you that each and every member of that production team is an integral part of the process. And when one comrade falls, it sends ripples through the entire company.

Such is the case with Sarah Jones, a second assistant cameraperson with a few credits under her belt who paid the ultimate price for getting “the perfect shot” this past week when she was struck by a train while on location for Open Road’s Greg Allman biopic Midnight Rider. The incident has incited a tidal wave of discussion about the safety of movie sets and speculation as to whether the crew had permission to shoot in that particular location. Honestly, it doesn’t surprise me – as a filmmaker myself, I can attest to the ridiculous mountains of red tape that one has to scour to just accomplish the simplest task. There is so much room for error, an infinite number of ways that a ball can be dropped, or a T not properly crossed, for an entire production to come to a screeching halt. It really is a miracle that ANY films get made. As we know, real change usually doesn’t occur until tragedy strikes, and that is unfortunate, but if Miss Jones’s death can shed some light on the clusterf*** that is film production, then maybe there is a silver lining.

In the meantime, supporters all over the industry have taken Sarah’s death to heart, and a Facebook group entitled Slates for Sarah has gained enormous momentum in the past few days, as crews from all over the entertainment industry have paid homage to a fallen family member – one of their own… one of the faceless worker bees who comes in early every morning, leaves late every night, and whose hard work the average viewer will never be able to conceptualize.

There’s also public outcry (and an online petition) to have Sarah’s name included in the In Memoriam at Sunday’s Oscars telecast, but that is unlikely to happen at this stage. At any rate, is that really what’s important here?

So, the next time you go to your local movie theatre to catch the latest superhero blockbuster or thoughtful indie feature, stick around to the very end. Let all those people who worked so hard have THEIR moment in the spotlight too. Do it for Sarah.