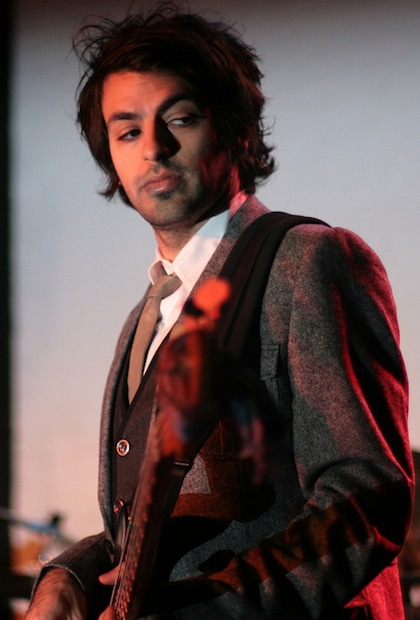 Ryan Lerman is an incredibly talented indie artist who plays six instruments, sings, writes his own songs, and produces. Currently, he is on tour with Ben Folds, opening the show along with Nataly Dawn of Pomplamoose, and I have no doubt that Lerman is set to become the next indie star. In addition to writing, producing, and performing his own songs, Lerman also creates “VideoSongs” for them, in which he films the process of recording the actual song. Check out this nifty one for the song “Only Everyday":

Lerman just released his first album, Pinstripes, The Sky, and in addition to touring, he is currently working on his second album. He took the time to chat with me about being on the road, the process of making a VideoSong, and how he feels about having his track “Do With You” featured on “Parenthood”...

YH: You are on tour at the moment with Ben Folds. Can you tell us how your tour has been going and where you are headed to next?

RL: It's going great. I’ve been playing with Ben for the last few years, since 2010 I think. This run I’m doing now, I’m playing with Nataly Dawn, and we’re opening for Ben Folds. So, I’m not actually playing with Ben; he’s got his old band back together, and they’re on a reunion tour. We started out playing at the Inaugural Brunch in D.C., and that was pretty amazing, then we went to Denver, then Park City, Salt Lake, Vegas, L.A., San Diego, Anaheim, San Francisco, and Napa. We’ve been busy! We’re headed to Reno, too.

YH: How did you, Nataly, and Ben all come together?

RL: That’s a good question. In high school, I met Jack Conte, who is one of my best friends. Jack and I started making music together when I was a freshman and he was a senior. Jack met Nataly at Stanford, and they formed Pomplamoose. And then I think that Jack met Ben at a music-tech conference years ago. At the time, Ben was looking for a bass player. So, Jack sent along a YouTube video of me to Ben, and then I got an e-mail from Ben asking me to play bass with him. I took him up on the gig. We’re all one big family!

YH: Are there any musicians that have had a particularly strong influence on your own music?

RL: There are so many. Elliot Smith has been a big one for me. I love him. Paul McCartney, Stevie Wonder, and Prince. Growing up, I was a big blues guitar player, so I was really influenced by Eric Clapton, Jimi Hendrix, and Stevie Ray Vaughn. I’ve always recorded music by myself, more as a necessity than anything else. I couldn’t afford to pay other musicians and record in a big recording studio like other musicians. So, because of that, I am inspired by people who can do everything themselves. For a while, all I wanted to be was a guitar player. When I started touring with bands as a bass player, I became inspired by people like Paul McCartney and Prince, who could play all the instruments well enough to execute the ideas that they had, and who were primarily musicians/songwriters. And that’s what I strive for myself -- to be not just a guitar player, but a musician/songwriter/producer and creative person all around. I can play the drums, piano, guitar, banjo, bass, mandolin, and I sing!

YH: Do you have a song (or YouTube video) that is your favorite to perform? Why?

RL: I like the song “Do with You”. Ben Folds helped me record it. He plays the drums and the piano on it. What I strive to do in songwriting is simplify; I try to find complexity in the simple things. It's an honest song. It was fun to get to record with Ben. We had a lot of fun recording the video for it. “Do With You” was just featured on "Parenthood" - the episode that aired on New Year's Day. It‘s featured in a scene before one of the couples get intimate in a hotel room. It was actually pretty awesome. [laughs]

YH: How did you first get into the music scene? Did you grow up as a musician?

RL: My parents are lawyers. They are not musicians. My dad used to play the Clapton Unplugged CD for me when I was about 5 to lull me to sleep. I should not say that they‘re not musical, because my mom taught me piano when I was 3. I was 7 when I asked my dad for a guitar. He brought me a little classical guitar, and the first song I learned how to play was “Day Tripper” [by The Beatles]. When I got to high school, there were a lot of smart kids, and I felt that music was the thing that set me apart. I figured that music might help me get into college. I ended up at USC as a studio jazz guitar major. The closest friends that I have now are people that I went to school with. I got my first tour the summer before my senior year. I played guitar with Joshua Radin and Vanessa Carlton. I started to see when I was in school that it may be possible for me to do this as a living. But I’ve always written music. I started writing music when I was around 10 or 11. When I got out of college, I started touring, and I recorded my first album, which I released last year. It’s called Pinstripes, The Sky. I recorded Pinstripes in between touring with A Fine Frenzy and Ben Folds.

YH: Are you currently working on any new pieces?

RL: I’m working on a second album. I’m out touring right now, so I write a little bit on the road and a little bit when I’m home. Then I record songs one at a time and put them up on YouTube. Then when I think that the album is finished, I wrap it up and print out some copies and call it a second record. I have 5 songs up now and another 10 written that I'm in the process of recording.

YH: Can you tell us a bit about what it is like to make one of your videos? They are all quite impressive! How do you go about that process?

RL: Thanks! My friend Jack Conte pioneered the idea of the VideoSong, which is the process of multi-track recording, where each take is being filmed as it is being recorded. What you do is keep track of each take and edit them together to make the video. So when you see an instrument, you are actually seeing a take of that instrument being played as the song was being recorded. You can see when a new instrument comes in and what the recording process was like. It sort of demystifies the recording process. With VideoSongs, we can show people how we are recording and experimenting in the studio with all of these different sounds. That’s the process. So, every time I record something, I film all of it, and at the end I piece it together to make the video.

I actually did a cover of Adele’s “Rolling In the Deep”, and for that video, I worked with a director by the name of Matt Silverman, who is very talented. It was actually just the two of us who did that video. My grandparents' apartment was being renovated; there was severe water damage, so they basically gutted it. While it was under construction, there was dust everywhere and paint. So we went in there with a bunch of instruments and filmed a video in there. All of the stuff you see in the video was not actually intentionally put there, but it worked. "Rolling In The Deep" wasn't a VideoSong; it was just Matt shooting in my grandparents' apartment. All my other videos show me recording the actual songs in my studio at home.