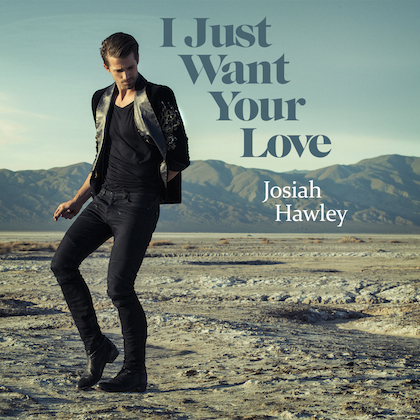 If you’re a fan of soul, R&B, and pop-infused music, then you’ll definitely be a fan of Josiah Hawley!

Although you might recognize him from Season 4 of NBC’s “The Voice”, Josiah has come a long way since he was on Team Usher -- his debut EP, Church, is set to debut this summer! The “I Just Want Your Love” singer gave us the scoop on his songwriting process, what it was like working with Usher, and how he’s developed his own style as a musician!

YH: You just released your new single “I Just Want Your Love”; Congrats! Can you tell us what the song is about and the inspiration behind it?

JH: Thank you so much! In the song, I'm telling this girl that, even though the world can be fake and people can be selfish, she shouldn't lose hope. I'm telling her that I'm different, that I have no agenda; I just desire her.

YH: Your new EP, Church, is set to debut this summer. What can your fans and audiences expect from this EP?

JH: The fans can expect upbeat and mid-tempo grooves with melodies that'll catch their attention. I took my time and was intentional with the storytelling, so I hope that comes across. I want audiences to expect these songs to make them feel something, while getting them to move at the same time.

YH: Tell us about the process behind creating your EP.

JH: I took a year developing this sound and style. I wanted to do something I felt was exciting and different. My goal was to put out something that represented me more than ever before. My friend Casey and I started the writing process on guitars and notepads. We wanted everything to be as raw and organic as possible; we wanted it to feel good.

YH: Why the name Church? Is there a story behind that?

JH: It all started with the sound. I grew up with soul, R&B, motown, and jazz. There was a videotape my parents bought for my brothers and I when we were really young. It had music from Stevie Wonder, Marvin Gaye, The Temptations, and many others. I watched that tape at least twice a day for years. I know all the lines and all the songs. Another movie that shaped me was The Blues Brothers. It features Ray Charles, James Brown, Aretha Franklin, Cab Calloway, and others. Both of those movies produce the same effect on me: they cause an insane excitement and restlessness that drives me to passionately write and perform music that means something to me and to others. I hope people think this music is fresh and at the same time pays homage to the sound I've loved my whole life.

YH: You had a great run on Season 4 of "The Voice"; how do you think that experience (and working with Usher) has shaped your career as a musician?

JH: It's funny because, at first, I wasn't at all interested in "The Voice". I had heard shows like these had very bad contracts. What got my attention was when a good friend causally explained that "The Voice" was different (he had been on the previous season) and that it was an opportunity to perform on a platform that reached over 17 million people. And I learned many things -- how to manage time when there seems to be very little of it, how to manage the stress of knowing millions are watching your every move, the importance of having an amazing, hard-working team (learned that from Ush), and, most importantly, the value of story. Your story is yours and yours alone, and it carries power with it; power to connect people or the power to separate and divide.

YH: Your sound is often described as “retro-infused”; how did you develop your own style as a musician? Are there other major artists or musicians you’re inspired by?

JH: There are so many artists I'm inspired and influenced by -- so many! Apart from the above mentioned, others include Queen, Ella Fitzgerald, Johnny Cash, The Beatles, Muse, Jeff Buckley... the list goes on. One of the joys of my upbringing was being exposed to this caliber of music. As a result, I've gone through many phases and genres as a songwriter and artist. I started multiple bands and experimented with various sounds, mostly in the pop/rock genre... but it wasn't really me, it didn't feel right. So, I took everything I had done previously, set it aside, and, with my production partner, sat down and went to work. I'm very pleased with the final result.

YH: Are you working on any other projects at the moment? Is there a future tour in the works?

JH: I'm gonna start by performing a few shows in L.A. and then we'll see what happens. I'd love to see my single "I Just Want Your Love" and my upcoming EP Church really take off and gain some traction.

YH: If you could open for any artist on tour, who would it be? Why?

JH: Bruno Mars is definitely an artist that stands out. I love the passion in his music. There's an excitement to his sound, and I love that he has a big team on stage with him. He's such a showman. Opening for him and seeing his show night after night would be fun and inspiring.