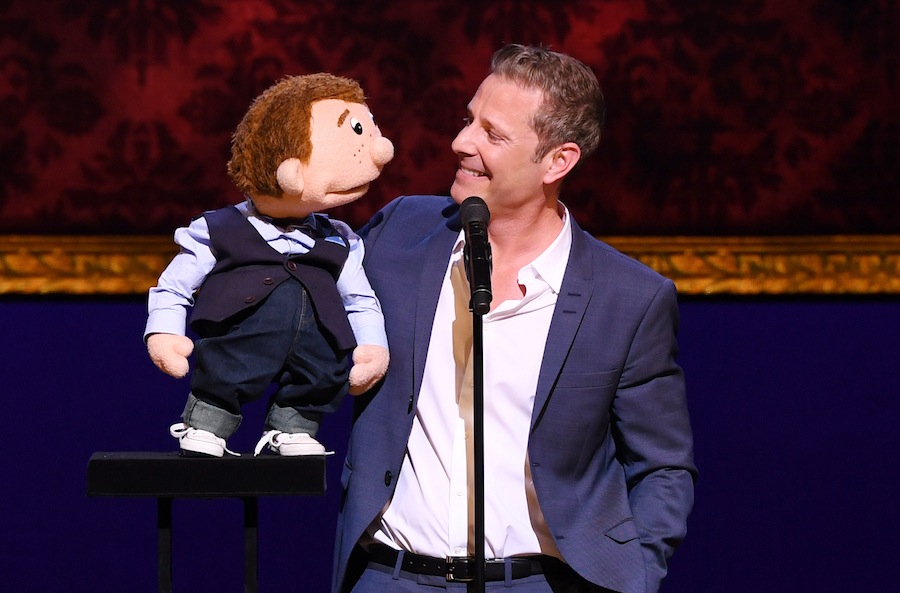 The winner of Season 10 of “America’s Got Talent”, ventriloquist Paul Zerdin, has been quite busy since his big victory, cracking up audiences on the Las Vegas strip with his three trusty puppets (loudmouth Albert, sweet Baby, and quick-witted Sam). Zerdin is indeed a voice-throwing extraordinaire who has now become a bona fide act at Planet Hollywood with his own official show, Mouthing Off.

Zerdin’s ventriloquist aspirations first began when he was 10 years old, living in the U.K. After a family friend gave him a puppet theatre, he began to put on his own shows and became hooked. He then went on to work in a magic shop, and his career as a magician (and later a ventriloquist) began.

During our chat, Zerdin and I discussed how he created his characters, the best magic show he ever put on, and what it’s like to live and work in Las Vegas!

YH:How did it feel to be the winner of "America's Got Talent”?

PZ: Because I’d been gigging back home in the U.K. and on cruise ships around the world during the competition, I was flying backwards and forwards across the Atlantic, so to be honest, when I won it, it was a mixture of euphoria and jetlag! I actually couldn’t believe it; I was getting ready to say congratulations to the other guy, so when they announced my name, my heart skipped a beat. I wasn’t prepared and there were lots of people I wanted to thank and there just wasn’t any time.

YH: Where did you get the ideas for your three characters, and how did you go about creating them?

PZ: Sam was my first character, and he is like a muppety Bart Simpson, really, with a bit of me! Albert came next, and he is based on a couple of real characters I've encountered over the years with a bit of my Dad thrown in! Baby was the last character to enter the family, and I was doing a Summer Season show in Blackpool in England, and I didn’t have quite enough material for the fun show, so I had bought this Baby character a year before at a ventriloquist convention and thought I’d maybe give it a go. So the night before the show opened, I was on the phone writing the act with a comedian friend of mine, and I tried it at the opening of the show the next day, and it worked, and the baby was born!

YH: When did you first become interested in ventriloquism?

PZ: I had always been a fan of it but never really considered it a job option! I was a massive fan of Jim Henson and loved the Muppets, and then I saw a British ventriloquist called Ray Alan on a variety show at home on the BBC when I was about 14, and he blew me away. His technique was perfect. A friend bought me a book written by him a year later, and i started learning it. It took me 2 years to grasp the basics, but that book is now my bible! I became friends with Ray towards the end of his life; he was the best ventriloquist in the world!

YH: Do you have any ventriloquists that particularly inspired you?

PZ: See above! I met and interviewed Jeff Dunham at the Venthaven ventriloquists convention in Kentucky some years ago, and he was fantastic. I thought to myself, "He will be a big star one day." I wonder what happened to him?

YH: You actually worked as a magician and in a magic store. Do you have any shows that particularly stood out for you (in either a positive or negative way)?

PZ:I left school at 16 and became a professional magician for some years but was working on my vent act at the same time. I worked for a couple of years part-time in Davenport's of London, one of the oldest magic shops in the world, and I made a lot of great contacts. In my last year at school, I had joined the junior magic club that belonged to Davenports, and I borrowed an illusion for the school talent competition. It was your usual kids talent competition where someone sang a song, read a poem, did a tap dance... I levitated my sister! I blew them all away! I won the competition, and that gave me enormous confidence.

YH: Las Vegas is a rather eccentric city. Since moving there, what is the strangest thing that has happened to you?

PZ: Moving to Vegas has been the strangest thing I’ve ever done! I’ve been lucky enough to work all over the world and perform at some amazing gigs, but to headline my own show on the Strip is, as you say, "awesome!"  But I suppose standing on stage during my show at Planet Hollywood and looking over and seeing one of the world’s greatest ventriloquists Terry Fator sitting in the audience watching me has to be quite a strange feeling. We’ve become friends.

YH: Since you are from the U.K., I have to ask: Who is your football team?

PZ: I’m afraid I’m not a football fan. I am a big tennis fan, though, and Andy Murray is really going great guns at the moment. I’m from Wimbledon, so I guess I’ve been brought up with tennis. Mind you, America has produced some of the absolute best players, though, especially one rather well known tennis player from Vegas!