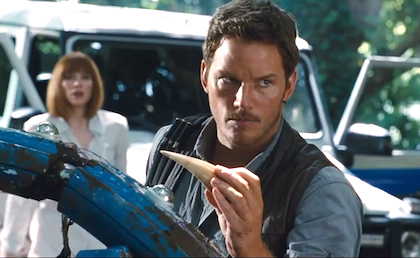 Recently it was announced that the trailer for the latest chapter of the Jurassic Park saga (no prequels please) was going to be released on Thanksgiving Day. So either Hydra pulled off another truly amazing hack or the powers-that-be decided that they didn’t think people would necessarily want to watch dinosaurs tear into human beings while they were trying to tear into their turkeys. Well, whether it was sly marketing or the ghost of John Hammond making a little mischief, we have, for better or worse, our first trailer for Jurassic World. Unleash the hounds...I mean raptors!

So, what can we deduce about this trailer? Well, for one thing, it (thankfully) doesn’t give too much away, so that’s certainly a positive point. Genetic manipulation is how these dinosaurs were created in the first place, so it is hardly a surprise that the cause of all of the film’s problems is that somebody went all Jackson Pollock with some dino DNA. Years ago, the original idea for a 4th Jurassic Park movie was supposedly centered around dinosaur/human hybrids that could actually walk and talk like you or me. And they carried guns. Well, after much presumed laughter, that idea was scrapped, but I would not be surprised if it is revealed at some point that human DNA was used in some way, shape, or form in creating whatever offscreen menace is causing the new park to have to close early on a Saturday.

But hey, the park is finally open after all this time! My favorite thing about the trailer is actually at the very beginning when the mother (played by Judy Greer) inadvertently gives her child good advice while clumsily trying to make a joke: “Remember, if something chases you, run.” Oh gee, thanks, Mom. Well, she’s either a bad parent or the trailer is revealing in one sentence that the park is so established and safe that people have actually forgotten about all of the past tragedies that previously surrounded this little theme park venture. It’s a lot of information in one little line, and that makes me hopeful that perhaps the rest of the script is just as tight. In fact, I predict there will only be 19 lines of dialogue in the entire film.

Chris Pratt is our leading man, and that is also a good thing, although this role seems far more somber and less jubilant than his dance-off-obsessed character from Guardians of the Galaxy, but that is also a good thing, because I missed out on seeing Zero Dark Thirty, and I want to see Pratt do something else besides be incredibly hilarious and lovable. Anybody else notice that those raptors weren’t trying to attack Mr. Pratt as he was riding amongst them on his little scooter? Mayhap these dinosaurs have been trained and will actually be allies of our main characters this time around? The Jurassic World version of Shamu also alludes to some form of training or manipulation, but how far they go with that loaded storyline obviously remains to be seen.

While I myself was not a fan of the last Jurassic Park movie, this latest one seems to have more of the spirit of the original one, or a the very least a more compelling idea. Jurassic World opens June 12, 2015, and I am certainly interested to see just how that works out for everyone!

Greg McIver can be found on Twitter @GregPMcIver. Be sure to tune in to his weekly film review show, Filmtopiacast 3000, which is currently available on YouTube.