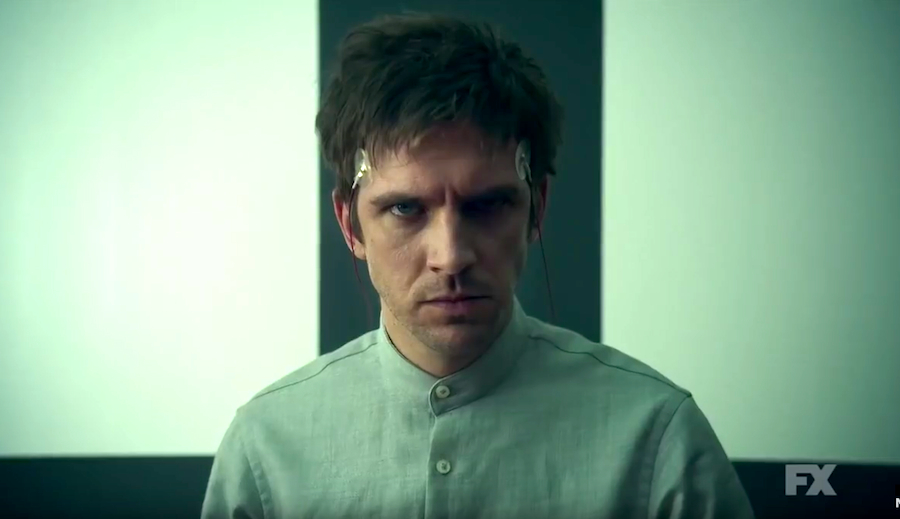 Here is a complete list of current superhero shows that I have seen:

I know above I’ve missed “Daredevil” and the Netflix-breaking “Luke Cage”, but I’ll get around to them eventually. I loved “Jessica Jones”, and the other three I have seen from time to time because my roommate loves them. I’m into comic books, but when it comes to the latest crop of superhero shows and movies, I’m more of a disinterested fan. I love “Jessica Jones” because of its genre blending of noir instead of being a superhero cheese-fest. Now, FX has given us “Legion”, and the pilot hit all the marks for me. “Legion” is insane, crazy, and much more than a superhero show.

The series follows a young man named David Haller (Dan Stevens) who has spent the better part of his life in a mental institution as a schizophrenic after fits of violence and being plagued by visions and voices. What sets him apart from the other patients is that he’s a mutant, as in the X-Men. This show, however, is said to not take place in the X-Men cinematic universe, so don’t expect Deadpool or Wolverine to drop in and torment the mentally anguished Haller. Instead, this is supposed to take place in a parallel universe where the knowledge of the existence of mutants is just starting to break out but is still a heavily-guarded secret by the government.

Haller is said to be one of these mutants, and if the show goes by the comic book of the same title it’s based on, then he is also the bastard son of Professor X. Due to his father’s extraordinary telepathic abilities, Haller inherited all that and much more than a bag of chips… more like one of those variety fun size packs, which extends to telekinesis and reality warping. The comic endows him with more, but we’ll see where the show goes. Somehow, in the mental institution, he’s able to get a girlfriend who also resides there named Syd Barret (Rachel Keller). Haller is also besties with an ex-junkie who’s mentally unstable named Lenny “Cornflakes” Busker (Aubrey Plaza).

“Legion” isn’t just about Haller’s lengthy stay in a mental institution; it’s also about the uprising of mutants as the government tries to track them down and take control of them. But the main question going on the whole pilot, at least for me, is: Is any of this is actually real? Is Haller a mutant, or is he just hallucinating somewhere? The question may or may not get answered at the end of the pilot. It’s really for the viewer to decide, and even though many have formed an opinion, I’m still on the fence.

What keeps the question going is the overall style of the show. It’s unconventional storytelling, even for FX. The show truly plays more like a movie by David Lynch or Stanley Kubrick than a TV show about superhero misfits. By the end of the pilot, there is definitely a cohesive story, but in the beginning, it might make some people feel… insane. The show has very specific colors, people constantly blending into things like trees in the background, old timey furniture mixed with not-too-distant-future set pieces, and edits that a puzzle out of the non-linear story that gives the viewer the feeling of a music video at times.

This choice of style is most likely the point, considering whether or not Haller’s powers are real -- he is quite an insane character. It's things we’ve heard since One Flew Over the Cuckoo’s Nest, that mental institutions will just make you crazier. Haller could’ve been normal before, but after his lengthy stays in these places, coupled with having no control over such a strong set of powers that would take a lot of focus and discipline to master, then you get a certifiable mentally unstable person. Maybe if he had been guided in his powers at a young age by, say, a certain school for gifted youngster, than maybe he wouldn’t be insane. But the question is still there that maybe he’s just a schizophrenic hallucinating in a padded room somewhere. I still really can’t tell.

The pilot establishes that Haller is nuts, but we haven’t quite seen how deep it goes. Something that stood out to me was that Haller didn’t quite make his own choices. For the most part, he was questioning what’s real and what’s not. Hopefully, future episodes will leave the door open for choices by him so we can see if he does rational or irrational things under his own free will and how they play out.

Overall, should you check out “Legion”? Without a doubt. Whether you love this superhero stuff or think it’s nonsense, this show really hits the mark of making something uniquely its own. If you love superhero stuff, particularly the X-Men, than I think this one will get you. Also, if you’re a comic book fan rather than a fan of the X-Men movies, I’m pretty sure you’ll enjoy this because it’s shaping up to be more like the X-Men than the X-Men movie franchise. If you hate all of this stuff and think it’s garbage but like trippy stuff, then this is the show for you. It’s got romance, problems with mental health, action, comedy, drama, and some of the trippiest imagery ever put on TV since “Twin Peaks”, and it’s only been the pilot so far. It’s looking like FX has another game-changer on its hands.

(Potential Spoilers in the below trailer for the upcoming second episode)