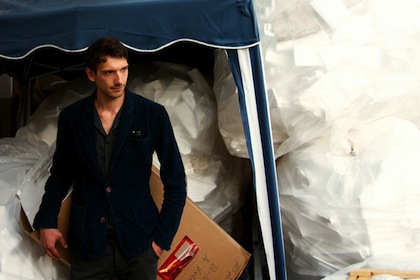 When one man is both a singer and a multi-instrumentalist, sometimes he needs to take a break from the pop quintet he co-founded, compose music, and play for other bands to create his own solo project. For Cologne, Germany-based Boris Rogowski, The Society Islands is exactly such a project, where he creates an interesting sound blend of neo folk, dream pop, and indie rock.

He’s dropping the album The Big Sleep in November, and it has some meaning in there that can be taken a couple different ways. The theme of the album is that it’s not actually possible to start over again, and not even happiness can last forever. But rather than focus on what’s awful about that, the point is to tap into “endless creative power of discontent”. Some historians wonder if many of our esteemed artists of the past would have even made the work that they did if they were revered for their crazy minds like we tend to do now, so this sentiment holds true both in the artistic sense and also for just being a human.

The Big Sleep opens with themonologue of a woman in a drug-induced state of wonder, realizing that she “can’t use color” but that she “can do everything”. “Cheap Life” taps into the alternative vibe and is relatively easy-going despite it’s sentiment. “From My Mouth Into Yours” is multilayered and haunting, opening with overlapping male and female vocals and is a little cinematic in its delivery.

The song “Archer” has a springy organ-type vibe which sounds borderline maniacal, like maybe you’re getting thoughtful about your current romantic relationship while strolling through the circus. The music is specific but takes unexpected turns and creates a kind of orderly unease.

Overall, there’s a lot to be discovered on this album, including the many parts where your brain tries to piece together what’s familiar with what most certainly is not.