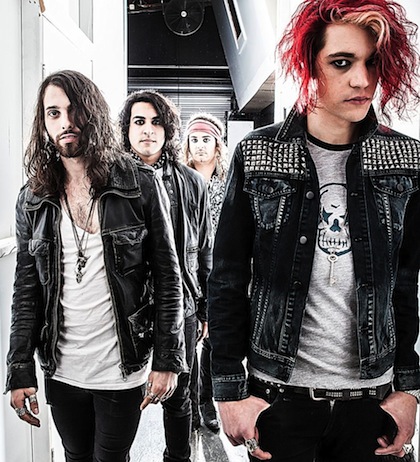 The Lockhearts are a Sydney-based pop/rock quartet who have only been playing live for a year together and found tremendous success with their first single… before it was even available on iTunes.

The Lockhearts claim to be a "don't-bore-us-get-to-the-chorus" type of band, with a melody-driven approach to modern rock, and so far they’re proving to be anything but boring.

The relative newcomers managed to land themselves an MTV hit with their song “Freakshow”, which took the #2 position on the MTV Hits chart.

They give off a here-to-stay type vibe, which seems to be working for them pretty well, because things happen, like their 4-week residency lined up at a spot in Sydney turning into 12-month-and-counting one.

The group formed in 2012 and is made up of Tim Meaco on lead vocals and guitar, Jameel Majam on bass, Brenton James on drums, and Age Vella on lead guitar. The band came together in pieces, with Meaco and Vella starting it out, Majam sifting in after filling in for a show, and James nailing an audition for the drummer spot. Their chemistry and similar sensibility allowed the band to develop together quickly.

Their song “Freakshow” is a high-energy and super fun rock song that has crossover possibilities because it such an accessible type of rock. The music is focused, specific, and generous. How nice to see passion. It’s not surprising the song made it’s way up the MTV Hits chart, nor is it surprising that they have placed Top 10 in the iTunes rock chart after releasing the single at the beginning of April.

Now we just need an album...