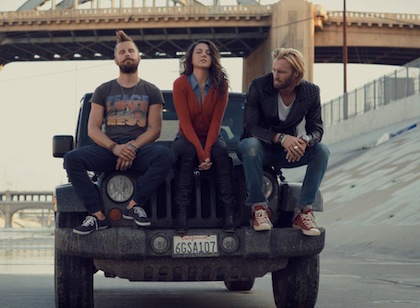 You certainly can’t go back in time, but you can, when done right, borrow the past’s musical influences. The Great Escape is a Los Angeles-based alternative pop group that does just that, taking the best sounds of the '60s and '70s and making them their own with a modern pop edge and West Coast flavored sound.

The group is made up of members Amie Miriello (vocals), Malte Hagemeister (guitar), and Kristian Nord (drums). While they’ve created a group out of a shared love and inspiration of all things California, none of them are originally from the Golden State. Malte and Kristian are from Germany, while Amie is from Connecticut. The three met after independently moving to L.A. while they were all writing music for other musicians.

They came together with the intention of gathering up some of that sunshine and proverbial California dreamin' that thrives on the West Coast and turning it into something they could express through their music. Their sound is influenced by the timeless approach of their old-school favorites like Janis Joplin, The Rolling Stones, and The Beatles, but also by current music sensations like The Black Keys, Adele, and the Arctic Monkeys.

The group has been packing shows in Los Angeles and just recently released their self-titled first album on October 17, which was entirely self-produced on the release end. To create the album they enlisted help from Stanley Behrens on blues harp, Kevin Dorsey on vocals (he was Michael Jackson’s vocal director), Zac Rae on B3, piano, and keys, Marco Palos, and Katja Riekermann on the horns.

A lot of the vocals on the album were recorded immediately after they were written, and a lot of the first takes made it on to the finished product, so the feel is more organic as opposed to forced in any way. “All I Think About” will get you wiggling from the first beat, grows with Amie’s gritty, bold vocals, and lands with the swingy retro vibe. “The Secret Song” almost has a little folky vibe happening, while “Put It On Ice” turns a bit jazzy.

Always upbeat, always swinging along, always demanding full attention. It’s the type of music that belongs first in your convertible while you’re driving around feeling cool, then secondly on an HBO show where you can exclaim that you’ve already been a fan of the band forever, and thirdly at your favorite music festival.