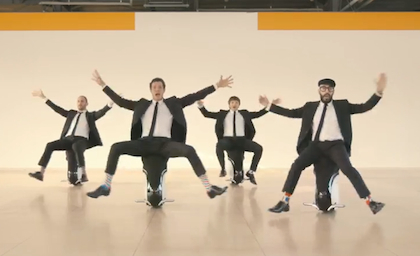 Life is pretty unpredictable, you guys. But there are some things that remain consistent – death, taxes, and OK Go music videos.

I don’t know why I continue to be surprised every time they release a new video. I always think, “Okay, no WAY will they be able to top this…!” And then they turn around and do just that. I guess I should just learn to stop questioning and start trusting. OK Go is helping me become a better person, basically.

Just today, they released their latest “endeavor”, and I put that word in quotation marks because this video is an “endeavor” like travelling to the moon was a “little day trip”. Sponsored by Honda and shot in Japan, the video for the appropriately-titled “I Won’t Let You Down” prominently features the company’s new UNI-CUB vehicle, which is basically like if a Segway mated with a unicycle. The video itself was shot with a special multi-copter camera that was developed specifically for this project. OK Go isn’t just entertaining the masses anymore – they are fueling technological progress!

The end result is a 21st century Busby Berkeley dance number, only instead of showgirls and jazz, it’s UNI-CUBs and alt-rock. Like I said, progress!

Check out the clip below, but put on a helmet first to keep your mind from blowing:

“I Won’t Let You Down” is the second single off the band’s fourth studio album,Hungry Ghosts, which was released two weeks ago.  I can’t even imagine what they are going to wow us with next… In fact, I won’t try to imagine it at all. Just sit back and wait for it to happen…