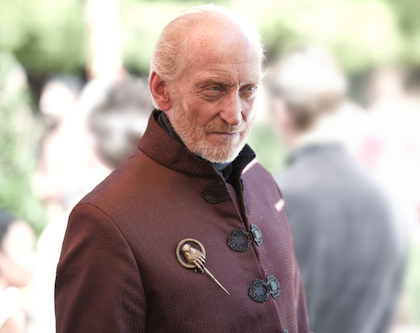 They say that unless you actually see a character die on-screen in “Game of Thrones”, don’t assume he or she is really dead. This gives me great hope considering my favorite character is Sandor “The Hound” Clegane, whom we last saw pleading for Arya Stark to put him out of his misery after a brawl with Brienne of Tarth. She didn’t grant his wish and left him to die in the wilderness, and as book-readers know, he’s probably still alive kicking back with some monks who saved him. So, good news for Hound fans like myself, but it’s highly unlikely we’ll see him again in Season 5 of the TV show.

We also won’t be seeing two other characters who are definitely still alive – Bran Stark and his sidekick Hodor. After appearing in all previous 4 seasons, the producers have decided to take a break with Bran’s storyline (which, there isn’t much left in the books at this point anyway) in order to concentrate on a bunch of new characters it’ll take you months to remember.

That will NOT include, however, one Arianne Martell, the heir to the Dornish throne and niece of the late Oberyn Martell (whom we last saw with his brains splattered all over the fighting arena care of The Mountain). This has many fans scratching their heads, as not only is she a major POV character in the fourth book, but, like I said, she is the HEIR to the kingdom of Dorne. However, in the show, her younger brother Trystane has been listed as the heir of Dorne. Why is this a big deal? Because Dorne is the only kingdom in Westeros that allows women a modicum of equal rights, including the ability to inherit and rule in their own right. That’s kind of the whole point of their “exoticness”, which Oberyn himself makes a point to mention to the Lannisters when he visits King’s Landing – that his kingdom is oh-so much more progressive than theirs. Well… maybe not?

And let’s not even get started on Lady Stoneheart. While there’s still a possibility that she might pop up in Season 5, nobody is holding their breath.

And then there’s someone whom we KNOW is 100%, without a doubt, dead as a doornail – Tywin Lannister. In the Season 4 finale, Tyrion broke out of prison with the help of his bro Jaime, but before he split, he decided to put two arrows in his dear ol’ dad while the latter was on the can. This left pretty much no ifs ands or buts about Tywin’s fate. Fare thee well, Charles Dance, we shall miss you!

…Oh, but wait! Now Dance is telling people that we “haven’t seen the last of Tywin.” Hmm, that’s funny, because I was pretty sure slumping over his own throne with two arrows in his chest was a good indication that we have definitely seen the last of Tywin. Apparently not! Dance wouldn’t elaborate, but the writing is on the wall – Tywin will be back for Season 5. In what capacity, it’s hard to say. He could appear in some flashbacks, but that’s highly unlikely given that the show has rarely-to-never used that particular plot device. A more believable explanation is that he might appear in a hallucination or dream of Tyrion’s. Maybe he’ll “haunt” Tyrion like the dad in “Dexter” or something…

Let’s review: In Season 5, there will be no Bran, no Hodor, no Hound, no Arianne, and no Lady Stoneheart – all characters known (or believed) to be alive. But they ARE bringing back a character known to definitely be dead.

“GoT” is currently filming Season 5 in Europe.