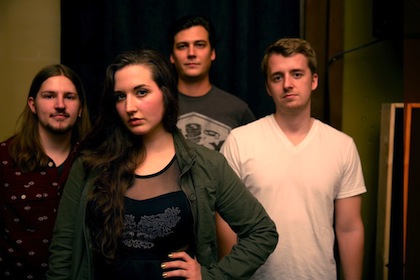 Unless you live in London, Ontario, you probably haven’t encountered the four-piece Canadian band Pacanomad playing live, but you can certainly listen to their music while you wait for their tour. The rock/R&B/soul/indie group have been gaining popularity in their homeland as well as online since releasing their EP.

Members of the band include Chantel Rivard on vocals, Nick Cifaldi on guitar, Dave Ball on bass, and Zack Stewart on drums. Initially the group started as just Nick and Chantel, but they quickly added Dave and Zack to round out their sound, and rightly so.

The band released their first EP entitled, Restless, this past summer, and it’s worth getting familiar with before they release a studio album next year.

Chantel’s vocals have a smoky, soulful feel that wouldn’t be out of place in a late night lounge, but with the rock elements incorporated into the music, you might suspect that their influences include Amy Winehouse or even a little old school No Doubt.

The song “Til It’s Mine” has more of an indie rock vibe, while “I Lost You” hits harder on the soul element. The latter also has an accompanying video of the band playing the song, and each member seems pretty solid in their role despite the group in its current incarnation being only a couple years old. “Restless” is by far the most haunting of the bunch both lyrically and stylistically. The song opens with: "You leave all of me restless / Taunting the walls I’ve built up with pride...”, so it sets you up to know there’s going to be a little power struggle involved, whether it’s between the two people or just within the vocalist’s experience of herself in relation to the other person. Whether or not the lyrics are actually personal to Chantel, it feels like they are, so it’s easy to connect to the story.

They’re definitely a group worth checking out if your soul/rock collection is a little light.