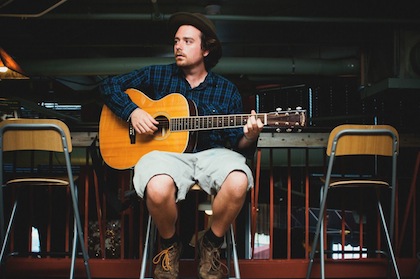 Indie/folk artist Matt Townsend is releasing his firstfull-length album. Matt initially started writing songs in 2008 but kept the growing habit secret until 2010 when he began performing at local coffee shops and on the streets where he was living in Vermont. His performances grew to stages and began evolving to places like Vermont, Boston, Ireland, and western North Carolina. He released an EP in 2012 entitled “What Light Shall Be” and is now set to release his full-length album, which was successfully crowdfunded and will be officially released on June 23.

Inspirations for the album included "strange dreams and visions, the precarious beauty of human life, and the mysterious forces of the Universe." Matt credits his songwriting influences to people such asBob Dylan, Neutral Milk Hotel,Townes Van Zandt, Neil Young, andWilliam Blake. His indie style pulls from traditional folk, rock and roll, and heavy importance paid to lyrics from a soulful perspective.

For the recording of the album, Matt was on vocals, acoustic guitar, and electric guitar, and other people who got in on the album production included: Jamie Bright on bass, piano, organ, back vocals, and percussion; Tim Carman on the drums; Rachel Keyser on violin and backing vocals; Johnnie Day Durand on the musical saw;Jeremy Hammond on acoustic bass and backing vocals; Casey James Saulpaugh on the pedal steel guitar; and Peter Bixby on the bass guitar.

“Carry On” is a melodic song that exposes a bit of a folky drawl on his vocals. “Wind Without the Rain” blends vibes from classic rock and alternatively sounds like a folk lullaby, while “Desire Like a Lion” is a thoughtful and gently craving track. Matt’s first full-length album is a blend of the old and the new and provides an easygoing journey with personal details that are a great introduction to him as an artist.