The "Parks & Recreation" Reunion Special Was The Shot of Wholesomeness We All Needed! 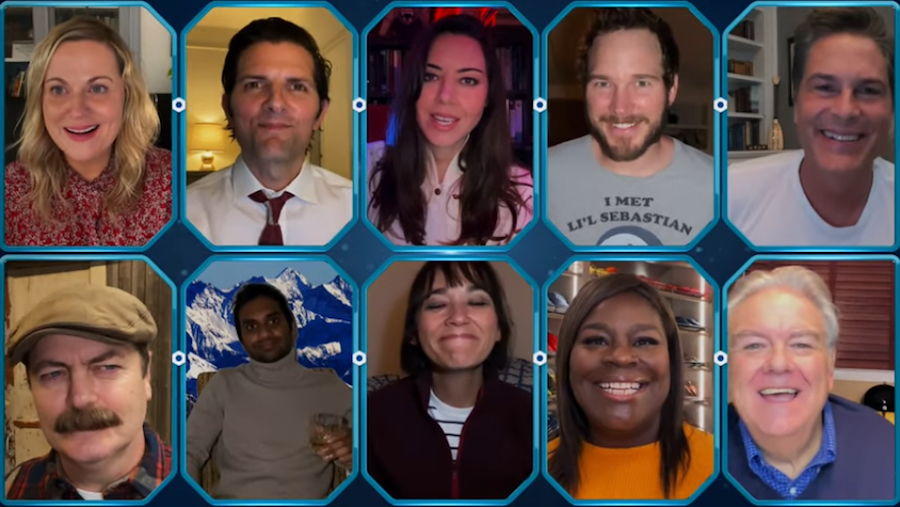 Just when all the COVID reunion specials were beginning to get tiring, NBC had a trick up its sleeve. The cast of the iconic sitcom "Parks and Recreation" reunited for a half-hour special last night (April 30) to raise money to help those in need during this time -- and oh boy, you will need some Entertainment 720 tissues to get through this one...

It’s hard to do a TV special right now that lifts people’s spirits. Remote production is difficult by nature, and mental health has taken a dip. It didn’t seem possible that a show could cut through the madness and provide us with the warm fuzzy hug that we needed -- until the characters from NBC’s "Parks and Recreation" reunited for a Zoom special about social distancing.

Back in Pawnee, it’s like time has slowed down. Everyone looks a little older and wiser, but they’re all still here, exactly as we left them. Leslie Knope (Amy Poehler), has begun a “phone tree” over Gryzzl (the remote conferencing app similar to Zoom in the Pawnee universe) to check on her friends. She first checks in on Ron Swanson (Nick Offerman), who is isolating in his cabin. She checks on more familiar faces -- April and Andy (Aubrey Plaza and Chris Pratt), Chris and Ann (Rob Lowe and Rashida Jones) -- then does a media blitz with her hubby Ben (Adam Scott).

We also get cameos from talk show diva Joan Calamezzo (Mo Collins) and news anchor Perd Hapley (Jay Jackson), old Pawnee tricksters Jean-Ralphio (Ben Schwartz) and Dr. Jeremy Jamm (Jon Glaser), and we even got to see hapless trust fund baby Bobby Newport (Paul Rudd). For one reason or another, everyone is alone -- except for a delightful cameo from Tammy II (Megan Mullally), Ron’s ex-wife (who happens to be Nick Offerman’s real-life wife). Tom Haverford (Aziz Ansari) is in Bali, and Donna (Rhetta) is in her magnificent shoe closet.

The gang’s all here, and so are some of the beloved props and references. We see Ben’s famous shirt and claymation figure, Chris Pratt’s Johnny Karate character, and even good ol’ Garry Gergich (Jim O'Heir)!

The episode ends with a remote sing-a-long of Andy’s legendary tune “5,000 Candles In The Wind”, the memorial song for Lil’ Sebastian, the infamous Pawnee equine celebrity. Everyone sings along, and for a moment, it’s like we never left this sweet town and all the folks who live there.

Remote television is inherently imperfect, but this reunion was about as close to perfect as it could get. Television impacts us because we rely on these characters to lift us up when we’re down, to whisk away tears with laughter -- something "Parks" has always had a particular gift for doing. It is incredibly strange that the reason for the show's reunion is a global pandemic, but somehow, it felt true to Pawnee fashion. We could all use a little bit of Leslie Knope's relentless optimism right now.

The episode benefitted Feeding America. NBCUniversal is matching donations up to $500,000. Now, go treat yo’ self and check out the full special below!

Also, be sure to peep Young Hollywood's HILARIOUS set visit with the cast from back in the day -- you won't regret pressing play on this one!