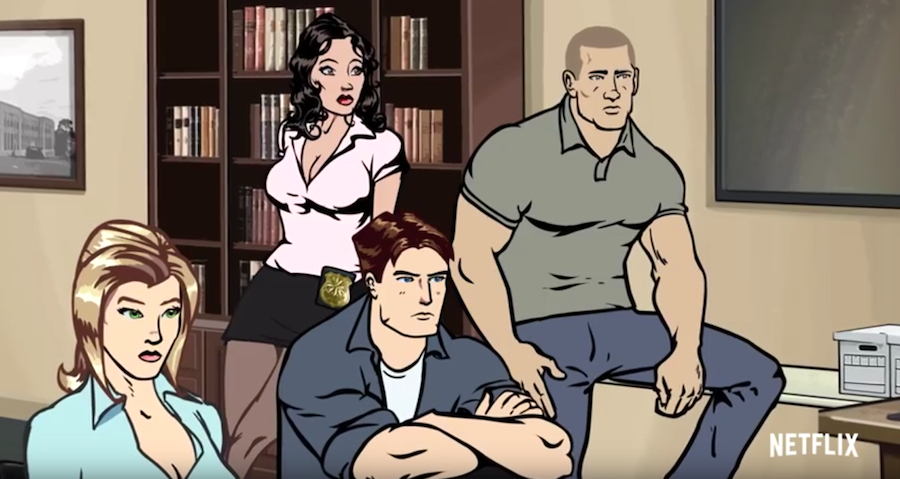 No stranger to television selections from around the world, this past weekend, Netflix added to their international arsenal with the release of its newest Australian import, “Pacific Heat”. Check out the trailer:

At first glance, “Pacific Heat” looks surprisingly familiar, doesn't it? It bears a striking resemblance to the hit American series, “Archer”. However, having lived in Australia, I figured that “Pacific Heat” wouldn’t be identical, since American and Australian humor are wildly different. Upon watching “Pacific Heat”, I can say that, while it does share some similarities with “Archer”, its brand of humor is what sets it apart from the FX series.

Here are some of the similarities:

Their profession (and inability to be good at it): In both “Archer” and “Pacific Heat”, the characters are quite terrible at their jobs. Although they are supposed to be “undercover”, they consistently seem to blow that and struggle with even the most simple assignments. However, the team on “Archer” does manage to get things done for all their screw-ups (and even surprisingly ran a good drug operation) while the team on “Pacific Heat” seems completely incompetent -- which is the joke. If they were actually good at their jobs, the humor would be lost and we would just be watching another detective/cop show akin to “Hawaii 5-0”.

Where the shows differ:

The humor: Quick-witted and off-the-wall, “Archer” is loaded with quirky and recurring jokes. For some Americans, “Archer” could be deemed too offensive, but one must remember that “Archer” is marketed as “adult humor”. Despite the characters rather crude behavior, they do actually care about one and another and on occasion actually commit an act of kindness or two. On the other hand, the humor in “Pacific Heat” is completely inapporpriate -- which is just about right by Australian standards. Australians typically do not have the same PC taste that Americans can do, and jokes that are deemed far too sexist or racist in America are quite normal in Australia (it’s one of the reasons why Australian shows, such as the numerous Chris Lilley shows, do not always translate to American audiences; it’s a cultural difference). One of the running jokes of “Pacific Heat” is that the female members of the team have to constantly dress as strippers to go “undercover”, a joke that for some may be hilarious but for others is incredibly offensive. If you find yourself in the latter category, then “Pacific Heat” is not for you. I also found that the pacing of “Archer” is a bit slower to that of “Pacific Heat”, and that “Pacific Heat"'s humor is more verbal than it is visual.

The characters: “Archer” is known for its rather distinct characters. No two are exactly alike, and they’re all completely bonkers (for a while, Cheryl becomes a country singer and Doctor Krieger creates his own girlfriend). On the other hand, the characters of “Pacific Heat” are not as well defined as those on “Archer”. The two lead female detectives are rather ditzy, especially in comparison to razor-sharp Lana, and both of the lead male detectives appear to be as goofy as Archer. In time, the show’s characters may become more developed (it usually takes a season or two for characters to really find their footing), but as of right now, “Pacific Heat” has a little catching up to do with “Archer"'’s oddball gang.

“Pacific Heat” is available for streaming on Netflix.