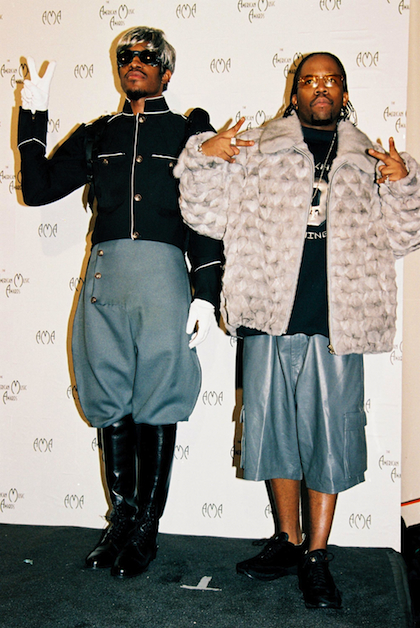 As you know, the Coachella 2014 line-up has been announced... And this is one of the best ones yet!

With Muse and Arcade Fire headlining, the festival is definitely going to be memorable! But the big new comes from a group that will be headlining the first night. That act is...

Cue the applause and balloons! OutKast is back! After a very long seven-year hiatus, OutKast is reunited and ready to play. They announced that they will be celebrating their 20-year anniversary by appearing at over 40 different festivals worldwide! That is quite a comeback!

In honor of this amazing news, I think it’s time to throw it back to one of OutKast’s greatest hits:

I was definitely shakin’ it like a Polaroid picture when I heard that OutKast would be coming back. I grew up on their music, and let's just say that I listened to my share of their Speakerboxxx/The Love Below album on my CD player at school when I wasn’t supposed to...

OutKast consists of two rappers, André “André 3000” Benjamin and Antwan “Big Boi” Patton. Originally from Atlanta, Georgia, the two met in high school and they released their first album, Southernplayalisticadillacmuzik, in 1994. They gained a lot of popularity and continued to push the boundaries of their music, even experimenting with an outer space-style influence. In 2003, they released a double album, Speakerboxxx?The Love Below, which won them a Grammy for Album of the Year, the first ever for a hip-hop group!

The band has reached milestone after milestone and pioneered their way through hip-hop. With six Grammys total under their belt, I cannot contain my excitement for their reunion... and a possibility of new music! Just the thought of new OutKast music is making me jump out of my chair! Let’s all keep our fingers crossed and finish up with an OutKast classic.

For more information about OutKast’s upcoming tour and the band check out their official website!