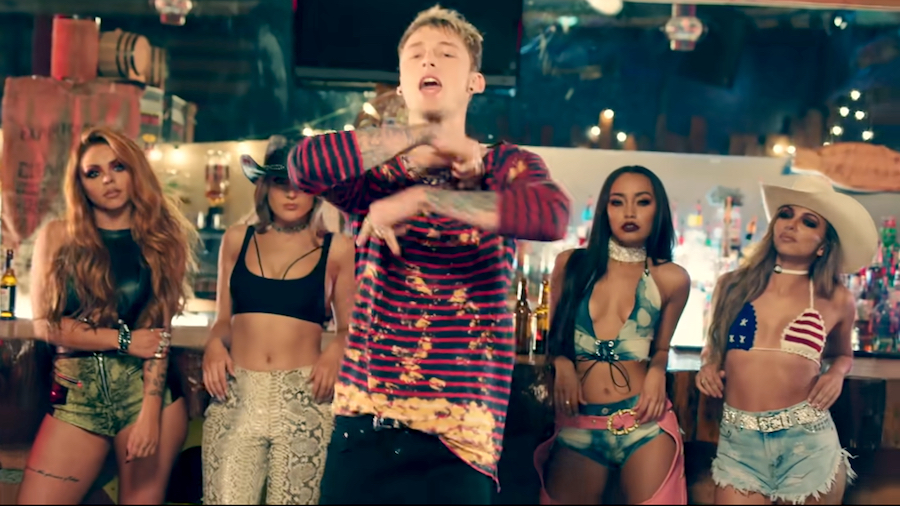 Little Mix just dropped a remix of their track“Confetti” this morning (April 30), featuring a guest verse from Saweetie. It’s their first release since Jesy Nelson left the group earlier this year, and that fact alone has us all in our feels! Let’s take a little trip down Memory Lane and look back at some of Little Mix’s most memorable collaborations so far (and be sure to check out their new Saweetie collab too)!

It says a lot about Little Mix’s talent that they worked with Missy Elliott on a remix of one of their first singles! “How Ya Doin’?” is a sassy goodbye to an ex that flips Curiosity Killed The Cat’s song “Name and Number” in a fun, refreshing way.

“Secret Love Song” is a tender ode to a partner you can’t tell people about yet, and the band often encourages the LGBTQ community to see it as a tribute to people who can’t come out. Jason Derulo’s feature makes it one of their most high-profile collabs and their vocals sound amazing together!

“Oops” is oozing with a retro flair that makes it one of the most memorable Little Mix songs to date! It’s about two exes realizing that their love story isn’t quite over yet, and the harmonies between the girls and Charlie Puth are unbelievable.

After a breakup, the ladies of Little Mix want to go out for a night to forget about their ex, and Machine Gun Kelly’s guest verse on “No More Sad Songs” adds to the fun! MGK describes moving on from a past relationship with someone new, offering a more hopeful perspective on the romance’s end.

Little Mix’s first bilingual collab is truly unforgettable! They take turns withCNCO describing a fun evening with someone they met during a night on the town, with Jesy andLeigh-Anne even offering some lines in Spanish.

“Strip” is one of Little Mix’s most vulnerable and confident songs to date, encouraging their fans to be secure in their bodies and own what makes them unique. Sharaya J’s verse is about discounting what insecurities social media might make you feel and just being yourself, making it a fun, uplifting track!

As the lead single from LM5, “Woman Like Me” welcomed fans into a new era with one of their splashiest features to date! The song sees the girls questioning whether their crush would want to be with them as they own their insecurities, while Nicki Minaj’s verse describes her own confidence.

What Little Mix collabs do YOU love?!