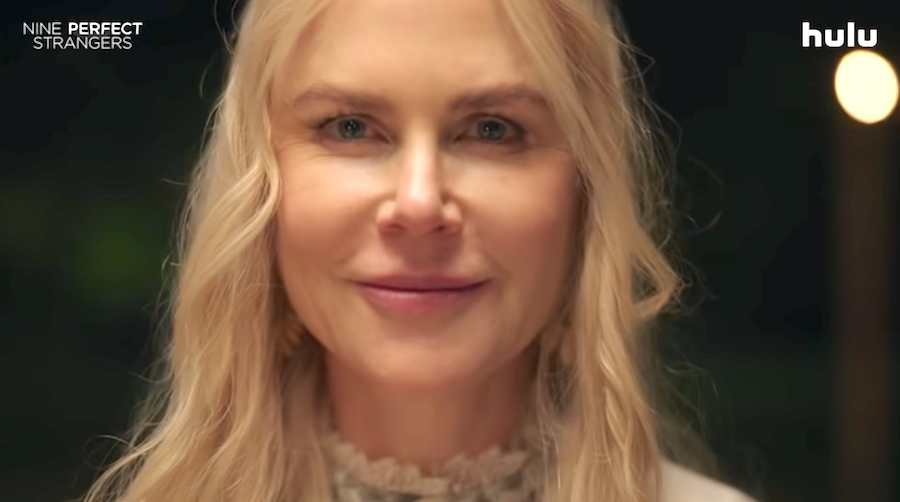 Your next limited series obsession is coming — Hulu just dropped a teaser trailer for the adaptation of Liane Moriarty’s popular book Nine Perfect Strangers, and it looks wild! Starring Nicole Kidman and Melissa McCarthy (who also serve as executive producers on the project), it’s set at a wellness retreat where nine strangers come together to destress and get away from their busy lives, but they have no idea what they’re in for.

The teaser opens with Nicole Kidman, in full wellness guru attire, welcoming the group to Tranquillum House, the retreat where they’ll spend a lot of quality time together. She follows with a slightly ominous statement: “You want to heal? Surrender yourself to me.” We have chills! We get some quick glances at the intense emotions that these strangers undergo, as well as some of the wellness tactics used: in one shot, we see the group seemingly lying in their own graves that they’ve dug for themselves. Could this be a metaphor for their decision to go on this wellness retreat?

We’re in good hands with the creators, who worked on previous Kidman projects "Big Little Lies" and "The Undoing", which both centered around a mystery that unfolded over the course of their seasons. We can probably expect something similar here, and we’re excited to dissect the characters and the true purpose behind Tranquillum. The cast also includes familiar faces like Manny Jacinto, Luke Evans, Tiffany Boone, Michael Shannon, Samara Weaving, Bobby Cannavale, and Regina Hall, who we know will give fabulous performances as the members of this group slowly peel back their layers.

I am once again, thinking about the cast for Nine Perfect Strangers pic.twitter.com/4dqdBURXln

While the teaser didn’t give us a definitive release date, we do know that the show is coming sometime later this year. This series is sure to be a commentary on today’s obsession with wellness and the sometimes unconventional ways we attempt to become well, as well as the insular environments that make it possible. With this incredible cast, innovative creators, and the anticipation of a cult-like mystery, "Nine Perfect Strangers" is sure to deliver us the perfect storm of a miniseries, and we can’t wait to see it!