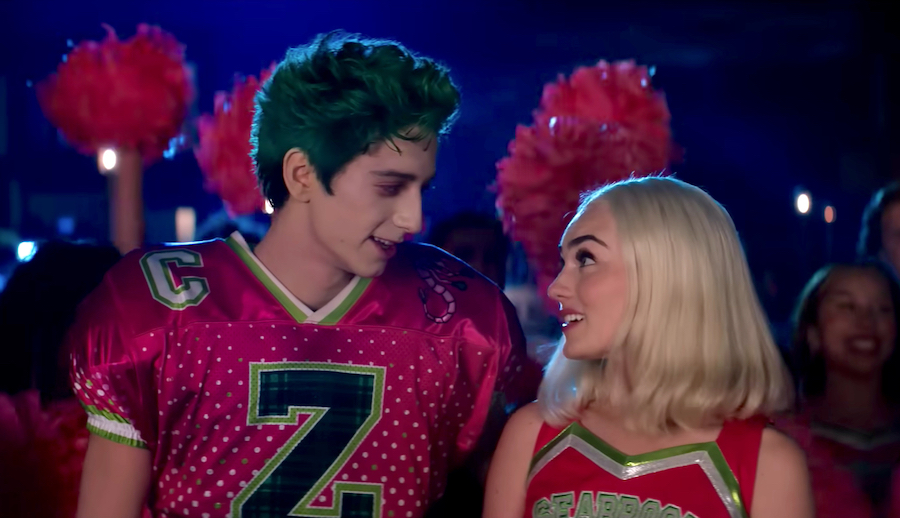 Disney+ just released the official trailer for Zombies 3, which will be hitting the streaming platform on July 15, and it looks like things are about to get intense! In the first movie, humans learned to peacefully coexist and enjoy the company of Zombies. In the second movie, Werewolves were added into the mix and everyone in Seabrook learned to further embrace each other's differences. Now, Aliens are dropping in to shake things up.

It looks like Zed (Milo Manheim) and Addison (Meg Donnelly) are as close as ever and Bucky (Trevor Tordjman) is his same hilariously egotistical old self, but there are some notable additions to the cast. For starters, Matt Cornett, otherwise known as E.J. Caswell from "High School Musical: The Musical - The Series", can be spotted in the trailer as an enemy alien! Also, RuPaul will be voicing The Mothership, and this installment with feature Disney's first-ever non-binary lead character played by Terry Hu! Is it possible that the third and final movie will be bigger and better than the first two? What could top the iconic musical numbers gifted to us by those two movies?

In anticipation for July 15, let’s take a look back at the best song and dance numbers from Zombies and Zombies 2!

“My Year” kicks off Zombies with immaculate vibes. On one side of town, Addison sings about long-awaited Freshman year cheer tryouts and the importance of fitting in. On the other side of the barrier, in Zombietown, Zed expresses his sheer excitement for Zombies finally being allowed to attend Seabrook High. While Zed's best friend Eliza (Kylee Russell) explains during this song that Zombies should revolt against remaining repression, Zed is just happy to go to football tryouts. He sees their first day of school as a step toward improvement worth celebrating. Bonzo (James Godfrey) is speaking in Zombie tongue, Bucky’s doing his signature flip, and everyone’s singing and dancing their hearts out.

During “Fired Up”, Addison and her new friend Bree (Carla Jeffery) make the perfect dynamic duo at cheer tryouts — their positive energy is contagious! Meanwhile, the whole auditorium pulls out all the stops to impress Bucky while he and his sidekicks eliminate potential cheerleaders from the ranks. Although Bree gets overwhelmed and bows out when challenged to win over a crowd, Addison gives an impressive performance, lifts Bree’s spirits, and makes the team. To top it all off, Addison talks to Bucky right after this song and convinces him to let Bree join the squad.

After Zed wins some football games and gains acceptance from humans, things are looking up for the Zombies. Zed brings Addison to a Zombie party where they celebrate with some seriously impressive dance moves. This scene features glow-in-the-dark decor, trampoline floors, choreo incorporating flashlights, and, to top it all off, Eliza gets her own cool rap!

Moving on to Zombies 2, “We Got This” sets up the premise of the sequel. While Addison and other humans and Zombies alike compete in elaborate challenges at cheer camp, Zed sings about the power plant being torn down to make a new cheer pavilion and wanting to take Addison to Prom, or, as the Mighty Shrimp like to call it, Prawn.

When Zed and Bucky run against each other for class president, Zed needs to ensure the votes of the new kids in town — the Werewolves — in order to secure the win. Zed attempts to befriend the Werewolves by teaching them how to fit in at Seabrook, but they are reluctant to change. Zed’s vocals in this song are top-tier, and the tune is extremely catchy.

The Werewolves believe that Addison is the Great Alpha wolf who can lead them to their moonstone. They bring her to their den and give her a glimpse into Werewolf life, including a whole new makeover! This is a turning point in the movie when Addison finally finds a place where she feels she belongs. Plus, the dance sequences in this scene are spectacular!

This might be the most powerful number of the franchise. When the Werewolves realize that their moonstone is the power source of the Seabrook Power Plant, they rush to stop the demolition. Werewolves, Zombies, and humans work together to persuade the demolition crew to bring their plans to a halt. Bonzo turns on the sprinkler system (uh-oh!), and everyone dances through the water. Zed realizes that he made a mistake judging the Werewolves and decides to join them in their cause.

Zombies 3 has a tough act to follow, but if it’s anything like the first two movies, it’s going to be amazing! As Zed instructs in the final song of Zombies 2 (“One for All”), “get hype, get excited!”, because Zombies 3 will be here before you know it!