OK Go's Latest "Obsession" Was 2 Years In The Making! 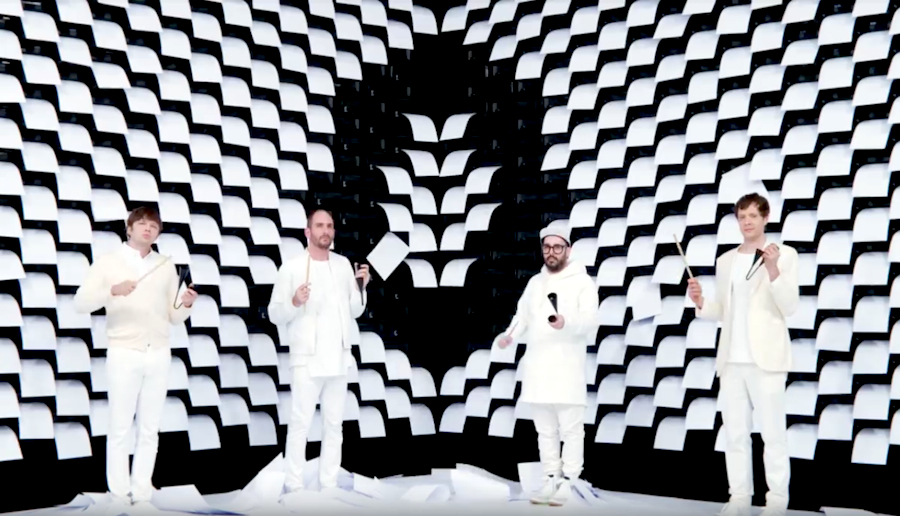 When you hear that a band that has won a Smithsonian American Ingenuity Award for Visual Art puts out another music video, you go watch it.

OK Go's new music video “Obsession” has been released and we are... well... obsessed!

The video, which was shot in Japan over the course of TWO YEARS (basically the Boyhood of music videos) was directed by frontman Damian Kulash Jr. and Yusuke Tanaka. They also collaborated with global paper brand Double A and in total utilized 567(!) printers and tons of paper. The production was clearly no small endeavor but the results are simply stunning. If you have epilepsy, I would probably advise you to sit this one out because the visuals are insanely vibrant and there are more colors than a paint store. The band members are all dressed in white and stand out in contrast to the bright backgrounds. It’s absolute insanity and I love it. The video was released a few days ago and already has over six million views.

For you environmentally-conscious folks, fear not -- as stated in a disclaimer at the beginning of the clip, all the paper used in the video was promptly recycled!

This is not the first time OK Go has delivered an incredible music video. They have been honored in the past at the Cannes Lions International Festival of Creativity in 2017, where two of their music videos were recognized.

As for the song itself, "Obsession" is a single off their new album Hungry Ghosts and is meant to touch on the intrinsic feeling of obsession that is a part of being human. The universal appeal of obsession is what inspired OK Go.

Of this inspiration, Kulash Jr. says; "This song is about how our most intense and complicated emotions are also our simplest and most universal. Obsession is so overwhelming and perplexing, but it's also so binary and basic -- everything's normal and then suddenly it's not.”

Kulash and Tanaka channeled this vibe into the animation of the music video and brought the magic of color on paper to life.

Their collaboration with Double A is just one of many collabs they have been involved in over the years. In the past they’ve joined forces with everything from dance teams, scientists, cosmonauts, and even muppets.

It seems that no barrier is too great for OK Go and they are ready to delight us again with their unparalleled visual creativity!

BONUS: Flashback to our visit with OK Go on the set of one of their earliest masterpieces, "This Too Shall Pass"!