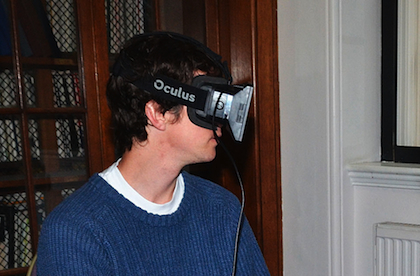 The future is NOW.

Technology is quickly developing right in front of our eyes, and it is crazy to think how far we’ve come in just a short span of time. Just check out these future predictions from movies and television that inspired real life technology!

But the latest news has been in virtual reality. Oculus VR has created the Oculus Rift, which has of late been primarily used for video games, making the gameplay that much more intense and real. Horror games have capitalized on this, and it has made playing those games a tenfold scarier!

It’s hilarious watching them play, but I know that, if I was playing, I would be yelling and screaming like a little baby just like them.

Could you imagine having a play space that large and interactive with all your games? Could you imagine other platforms of entertainment taking on this kind of technology? How about movies? YES??

Well, that time may be coming quicker than you expected! Oculus VR has decided to turn its focus to movies. They announced last month that Oculus Story Studio will be starting to put together an animated short, "Lost", that will incorporate the VR aspect within the film. Little is still known about the film itself and how they will be approaching the storytelling aspect, but we are excited to see how they adapt this technology to movie entertainment!

What do you think about virtual reality movies?