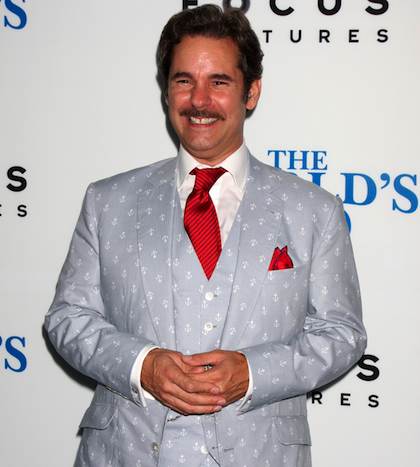 Comedian Paul F. Tompkins is known to many comedy nerds on the Internet for his appearances on different podcasts, particularly those on the Earwolf website. Earwolf is home to various podcasts that, if you threw a virtual rock into the pool of podcasts found on their site, the odds are strong you’d hit a show that features one of his guest appearances, such as “Who Charted?”, “How Did This Get Made?”, and “Comedy Bang! Bang!”. Now Tompkins is finally doing fans and Earwolf a service by making his own podcast premiering TODAY (April 1) called “Spontaneanation”.

I know what you’re thinking: A comedian making a promise to release something on April Fool’s Day? This must be a stupid prank. That’s where you just don’t know Paul. Mr. Tompkins is first and foremost a gentleman, and we know this because he performs comedy while wearing a suit. Plus, pulling a prank on April Fool’s Day? It feels kind of clichéd these days, right? Don’t believe me? Take the word from the man himself, as well as hear a preview of some of the stuff you will hear on the podcast:

Funny stuff! In case you were a bit confused as to what was going on (I’m talking to you, Grandma), this is an entirely improvised podcast, as many of them are, but the difference is that Tompkins and guests will create fully improvised scenes based on the stories they tell each other.

And Tompkins fans, there’s no need to worry about Mr. Tompkins not continuing to make random appearances on such podcasts as “Comedy Bang! Bang!”. He is making sure that, with “Spontaneanation”, he will have plenty of time to pursue his other ventures, like random podcast appearances, stand-up, acting, voice-over work, etc. So you’ll never have to worry about missing out on phone calls like this (warning: slightly NSFW):