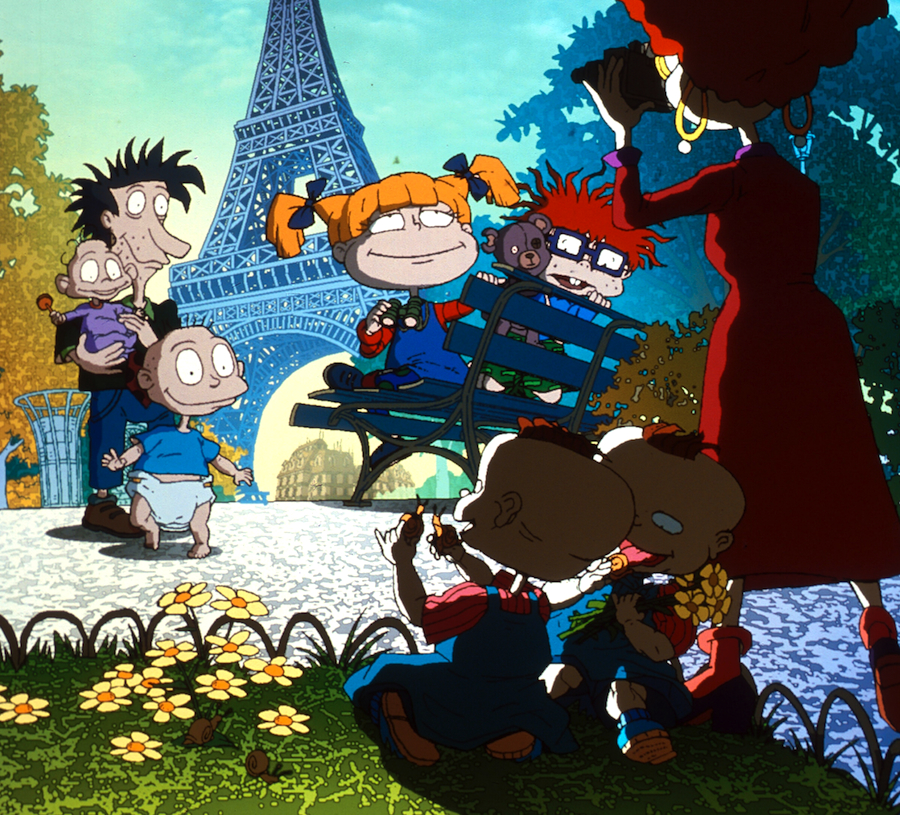 A few animation geniuses from the golden age of Nickelodeon gathered at Comic-Con over the weekend, including Craig Bartlett, Butch Hartman, andArlene Klasky. If you grew up watching “Hey Arnold!”, “The Fairly Oddparents”, and “Rugrats”, then these three are the ones to thank -- they created the iconic series! During the Con, the three (along with “Invader Zim” creator Jhonen Vasquez) participated in the panel “Happy Happy! Joy Joy! 25 Years of Nickelodeon Original Animation”, where they revealed what it was like to work on their original Nicktoons, offer a sneak peek of Hey Arnold! The Jungle Movie (to debut in 2017), and tease some details about Hartman’s brand new show “Bunsen is a Beast”, about a small creature who wants to attend human school only to find that it’s not as easy as he thought.

YH: Have you ever wanted a dream crossover between any of the Nicktoons?

AK: We already did that. I don’t quite know how to answer that. I think not right away.

CB: The two shows that I have been making for PBS [“Dinosaur Train” and “Ready Jet Go”], they want us to cross those two over. We’re actually talking about that. It’s funny because the dinosaurs do live in the Mesozoic Era, so that would be weird. But they do travel in a time-traveling train. So, we might bring them to the present. I don’t quite know.

BH: I wish I had a time-traveling train.

CB: [laughs] That would change quite a lot.

BH: That’s what I love about time travel -- it’s such a conundrum. We just know from Back to the Future to not mess up the meeting of your parents.

CB: Or to meet yourself, that’s always bad. [BH laughs]

YH: Do you have a favorite type of merchandise that was made for your show?

CB: Anytime our characters show up as plushies, I’m always thrilled. It’s just great. We talked about when you feel like you make it, your show pops up as a game show question or Jon Stewartmakes a reference to it on his show. But when I felt I truly made it is when I’m walking through an airport and I see a little kid carrying a plushie of one of my characters. It’s weird too, because the Nickelodeon shows are a little older. Our audience isn’t quite the toddlers walking around carrying plushies -- they’re older kids who are carrying T-shirts and backpacks, and so that was why it was kind of fun to make the pre-school shows for PBS. We got to make the tiny “Dinosaur Train” characters in plushie.

BH: I have one cool merchandise reference. This is kind of weird. We were driving on the freeway, and I looked in someone’s car, and they had one of those big cars with the TV screen in it, and the kids were watching an episode of one of my shows on the TV, in the car next to me! That was kind of cool.

AK: One of my favorites was something made by a young woman -- who actually lives in San Diego, she’s a college student -- she started her own “Rugrats” blog. I met her at another event and she came to the studio, and her friend had made (brought the materials and what not) a giant Ickis backpack that was so oversized. It was amazing! Of course I took a picture of it. I like the backpacks a lot. I’m fascinated when they’re the shape of the character.

BH: You know who should really make merchandise? The guys who made Star Wars. I wonder if it would take off...

YH: Were there any animation styles that inspired each of your own styles?

BH: I was always inspired by Walt Disney as a kid, because that was kind of the only thing that was on TV. They also ran Warner Bros. stuff and Hannah Barbara. Those are my big three, which are the Big Three.

AK: For me, since there weren’t that many cartoons around when I was growing up, I was inspired by Japanese and European illustration. I didn’t really read comic books growing up.

CB: Growing up, my uncle had the entire Peanuts and MADmagazine series from the first one, so I had both those series. I absorbed both those styles.

CB: Yes, his sense of humor -- and Mort Drucker too -- those were big influences. When I got older, I was influenced by painters.

CB: Well,Edward Hopper was a house painter. I do love his stuff. And R. Crumb.

YH: Do you each have a favorite episode of each of your series?

BH: One of my favorites was a “Fairly Oddparents” movie called Channel Chasers, where Timmy Turner goes into ten different cartoons that I grew up with. Everytime he goes into a different cartoon, the style changes -- he goes into Peanuts, "Rudolph, The Red-Nosed Reindeer", and he goes into “Rugrats” for about five seconds too. We couldn’t get Arlene and Craig in there, sorry! But that was a lot of fun to do.

AK: I wasn’t sure if you were working in that period, Craig, but there was a show [episode of “Rugrats”] that was based on the filmRashomon. It was about a crime that was happening, and a jury. Roshomon is a very sophisticated Japanese film that is the same story told from multiple points of view. I was so impressed that the writers came up with that. I think what was really influencing for Gabor and I was live-action film and Japanese film. Kids wouldn’t know anything about that, but if they grow up and re-watch it, they can read more into that. But that show stood out to me because it was the secret the writers were in on.

CB: Arlene makes a really good point because we’re making shows for children, and so chances are they will not know what Rashomon is. That’s a perfect example. That whole group really lovedRashomon. It’s so groundbreaking, it almost becomes a verb. So, from the cartoons made from the '90s to now, there are probably a lot of Rashomon episodes, because that’s what the writers knew.

BH: We should do Pokemon Rashomon. It already has the word “mon” in it.

CB: We would always quote movies in "Hey Arnold!". We would drop in a reference to Apocalypse Now, and when the kids later watch that movie, they’re going to say, “Hey they ripped off 'Hey Arnold!'"

CB: But it’s always going to be that way. It’s adults who are making these cartoons.

AK: And the adults want to incorporate adult stuff.

CB: I think the episode is in the second season [of “Rugrats”]. We also went to12 Angry Men a lot in “Rugrats” and “Hey Arnold!”.

YH: What is one thing about each of your Nicktoons we would not normally know?

BH: There was an original girl who did the voice of Timmy Turner beforeTara Strong. She did the original pilot and six short cartoons and was going to be the voice of Timmy Turner, but she passed away. So we had to recast Timmy Turner. Her name wasMary-Kay Bergman. She was a really great actress. That’s one fact, not a super fun fact. I also thought of the idea for “Danny Phantom” in a moving van with my mother, driving from Las Vegas. It was a long and boring trip [CB laughs], so I thought of the idea for the show.

CB: What’s interesting about the casting is that we are now on Arnold #6.J.D. Daniels was the first Arnold, but when he came in to record about a year later, his voice had dropped, so we immediately had to go to Plan B. The second Arnold played Arnold from Episode 1 to Episode 26, but then his voice cracked. Kids were doing the voices, so I wanted to pull from the Charlie Brown thing of having kids voice the kids, but that’s the price you have to pay -- you have to replace your boys. And some kids, and their voice changed into their adult voice, like most of the women, and that was fine, but the boys had to sound like a kid. Then afterPhillip [Van Dyke], we had Spencer [Klein], then we briefly had a kid named Alex [D. Linz] play Arnold, so now, 15 years later, we are onto the sixth one. They all play opposite Francesca Marie Smith, who plays Helga. We actually tried to getArnold Schwarzenegger on an episode playing aTerminator-type character--

CB: We thought that would be a really cool little press thing, like “Arnold plays on ‘Arnold,’” but he passed! So Maurice LaMarche did a wonderful job as [in Schwarzenegger accent] "The Abdicator."

AK: I’m trying to think about what I haven’t already said before. There’s a lot out there... I have said this before, only once --Bruce Willis was the dog in the crossover movie. He came and he recorded. We were thrilled! He left and he came back. He said, “You know what? I think I can do a better job.” Keep in mind, he had recorded the whole thing. He decided to come back and do it again for no money. I was floored that this big star would do it. We were very grateful, and I was impressed by how hard he wanted to try for a cartoon. That’s something slightly different.