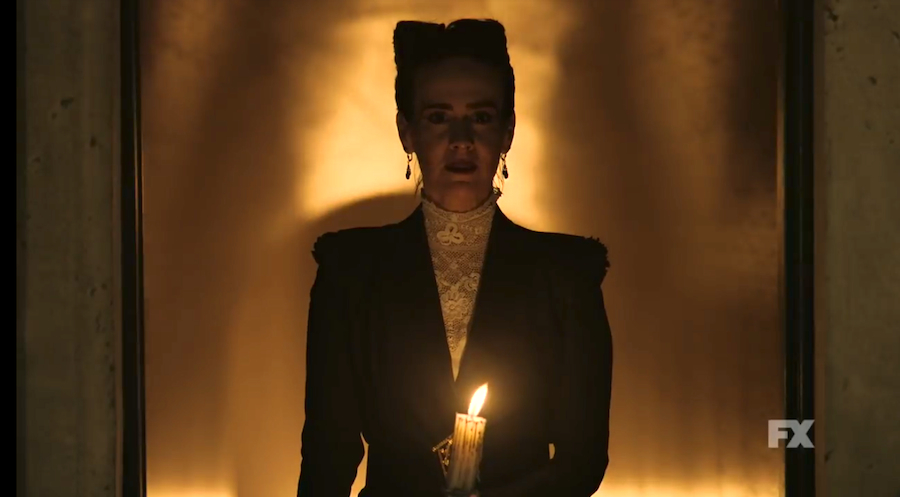 With Labor Day brings the unofficial end to Summer and the official start of the new television season. And with that brings the newest season of "American Horror Story".

Last night, the AHS Twitter account posted a new teaser for its highly-anticipated upcoming 8th season, "Apocolypse", captioning it: “A glimpse of what tomorrow brings… #AHSApocolypse”.

In the video, fans finally got a glimpse at some of the first footage released of their favorites actors from AHS past that would be coming back for this season. As previously reported, the 8th season of this show will be a crossover of two previous seasons: "Murder House" and "Coven". Here are a couple of things from the trailer worth noting:

- The trailer starts with a shot AHS alums Leslie Grossman and Evan Peters joined by newcomer Joan Collins on a private plane, which seems to be crashing.

- We then see the grown-up Antichrist Michael Langdon, played by Cody Fern, who you may recognize as David Madison in this season's "American Crime Story: The Assassination of Gianni Versace" (another Ryan Murphy-produced series).

- Another shot brings on the return of Rubber Man from "Murder House", who is crawling on a ceiling above,

- Towards the end of the trailer, we see the return of the Supreme herself, Cordelia, played by Sarah Paulson, and witches Myrtle (Frances Conroy), Zoe (Taissa Farmiga), and Madison (Emma Roberts).

Also spotted in the trailer are: Billie Lourd from "Cult", taking on a new role as Mallory; Dylan McDermott as Ben Harmon; and Jessica Lange, who will be reprising her role as Tate’s mother, Constance Langdon, in her first return to AHS in 4 seasons.

"AHS: Apocalypse" is set to premiere Wednesday, September 12, on FX, and it’s safe to say, fans are freaking out and ready to see what this new season and crossover will bring!