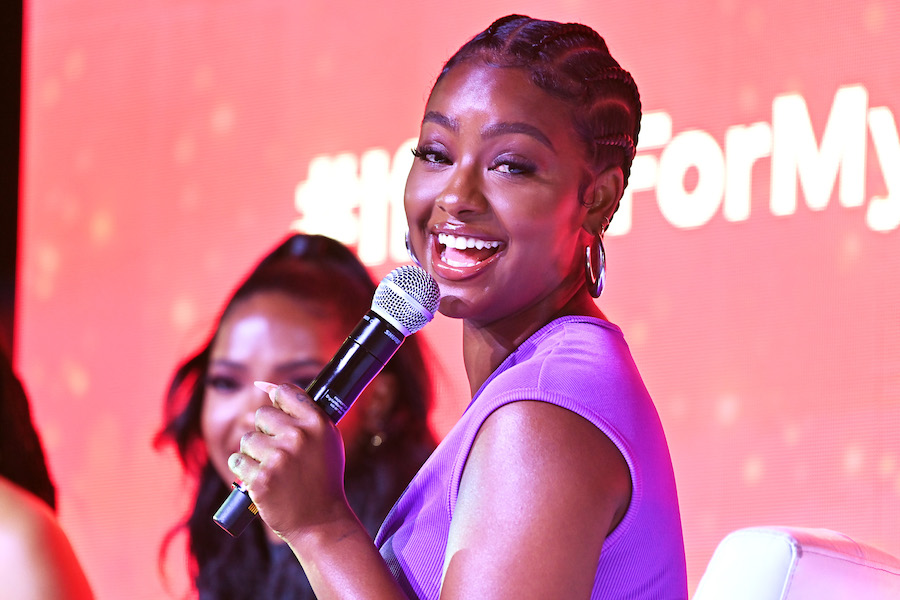 Even though Zoey (Yara Shahidi) and the gang have graduated, "Grown-ish" is still back for more! Zoey’s little brother Junior (Marcus Scribner) is now “grown” himself and starting his college journey at his sister’s alma mater, Cal U, completely switching up the plot of "Grown-ish" in an exciting new way!

Although previous "Grown-ish" characters Luca (Luka Sabbat), Sky (Halle Bailey), Jazz (Chloe Bailey), Vivek (Jordan Buhat), Nomi (Emily Arlook), and Ana (Francia Raisa) will not be returning for Season 5 as of now, "Grown-ish" has introduced a whole new cast that will accompany Junior on the insane experience that is college. Let's meet them!

This singer-turned-actress has joined the cast of "Grown-ish" as Annika, a sophisticated, intelligent go-getter who hardly takes no for an answer and is determined to make it to the top. Skye is best known for her professional singing career she earned after having made a cover to “Headlines” by Drake that gained 2 million views on YouTube. After she released her EP Everyday Living, she was able to sign with Atlantic Records at only 19. The songstress also took a dip into the film world after having roles in How High 2, Already Gone, and now "Grown-ish"!

Best known for his role in Space Jam 2: A New Legacy, Ceyair Wright plays Zeke, a handsome football player that is “just here for football and the ladies,” as he confidently mentioned in the first episode of the season. You would think he'd personify your typical jock, but he is actually very kindhearted and friendly. Wright started modeling at the tender age of 5 and later took upon acting as he got older. He secured roles in shows such as "Instant Mom" and "Training Day", and movies such as American Skin and Space Jam 2, his first major role, where he played Lebron’s oldest son Darius. This rising actor is definitely on the come up!

Model, comedian, and actress Tara Raani has joined the "Grown-ish" cast as Zaara, a first-generation college student who is extremely focused as she is currently on track to become a doctor, and, might I add, she’s also pretty fly. Raani is best known for her role in the television series "YAY WOMEN" but is also known for modeling, as she has been featured in brands such as Vogue and Vogue Italia and has walked for New York Fashion Week on several occasions. The comedian in Raani comes out through her TikTok account that has accumulated nearly 300,000 followers. This girl is a triple-threat!

Up-and-coming actress Amelie Zilber plays Lauryn this season, is a freshman that may be a little shy but is always open to having a bit of fun. Zilber started her career as a model after working with the agency LA Models and completing several assignments for them. She later worked as the lead model for the cosmetic brand Jouer Cosmetics, which happens to be founded by her mother Christina Zilber. Social media influencing is also under Zilber’s belt, as she posts pictures to her Instagram that has 2.6 million followers and videos to her YouTube account with over 472k subscribers. As a UNICEF ambassador, Zilber also utilizes these platforms to speak on current political issues that are affecting the world today. You go, girl!

Holding on to her own name, Slick Woods is Slick, a super stylish freshman who is “just happy to be here,” as she excitedly mentioned in the first episode of the season, and isn’t afraid to speak her mind. After being discovered by model Ash Stymest, Woods has worked as a successful fashion model who is most famously known for her work with Rihanna as the face of her makeup brand Fenty Beauty. Woods has done work for brands such as Calvin Klein, Vogue, and Moschino, working both nationally and internationally, and has also walked the runway for brands such as Yeezy, Fendi, and Jeremy Scott. This model seems to be fashionable both on and off screen!

This final new cast member, Hawaii native Matthew Sato, has joined the cast of "Grown-ish" as Brandon, a sophomore at Cal U who is smart, driven, and quite the catch. This actor, singer, and social media influencer has got it all, as he’s had roles for popular shows and movies such as Chicken Girls and "Doogie Kamealoha" while he also pursues a music career after releasing his first single “I Know” back in 2017. Social media influencing came shortly after, as his talent and good looks swept fans away and his Instagram page quickly gained 437k followers. Just wait until TikTok gets a hold of him!

Don’t miss the chance to see these characters make their mark on the newest season of "Grown-ish" every Wednesday night on Freeform and available to stream anytime on Hulu!