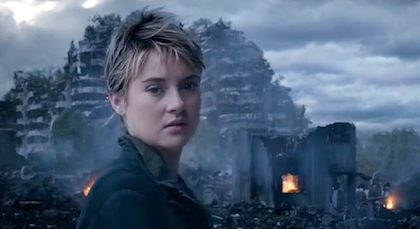 The new teaser trailer has come out for the second installment of Veronica Roth’s Divergent series. The second film is set to release in March of 2015, and this teaser trailer does exactly that -- TEASE!

It’s got so much and so little at the same time!

*WARNING: THE FOLLOWING WITH HAVE SPOILERS IF YOU HAVE NOT SEEN DIVERGENT*

In the trailer, Tris is found trying to save her mother from the destruction around them. Because her mother died in the last film, this leads us to believe that she is in some sort of simulation, much like in the first film when the Dauntless are trained to face their fears. I have many questions about what’s to come in this new film, but after I watched this trailer, I needed a recap of the last film.

The last movie, Divergent, left us with Tris and Four on a train headed to the end of the line. Tris narrates the end of the film, explaining that they are now basically factionless and will continue to fight for their people whoever that might be.  After, re-watching Divergent, I am even more excited for the Insurgent premiere.

Here are some things to look forward to in Insurgent.

2. The crazy and intense film sequences. If the teaser trailer has that many stunts and special effects going on, I can only imagine how action-packed the film will be.

3. Even though we didn’t see him in the trailer, we all know that Four (Theo James) will play a significant role in the film. Check out this profile on his character.

4. The progression of the intricate storyline. How have the other factions reacted to the take-over and rebellion of Candor? Who will stand up against them and who will join them? What’s going to happen to Tris and Four now that they have sentenced themselves to divergence? Hopefully all of these questions will be answered in Insurgent.

I’m not quite sure if I’ll be able to wait until next March for the film to come out, but I guess I have no choice. In the mean time, if you’re curious about which faction you think you’d be placed in, you can take the official Divergent aptitude test here!

Remember, Insurgent premieres in theaters March 20! In the meantime, check out our YH Studio interviews with Tris and Four themselves, AKA Shailene and Theo, below!