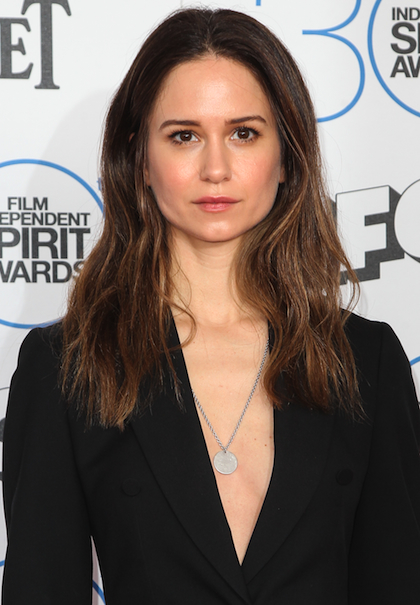 It's a good time to be a Harry Potter fan. In addition to the new Wizarding World of Harry Potter at Universal Studios Hollywood slated for a Spring 2016 debut, a spinoff film franchise is also on the horizon! Fantastic Beasts and Where to Find Them will be the first in a planned trilogy of movies based on the in-HP-verse textbook of the same name that Harry Potter and his fellow Hogwarts students are required to read. Warner Bros. recently announced that Eddie Redmayne would star as the book's author, Newt Scamander, and just this week they also revealed that the female lead would be played by Katherine Waterston.

That name not ringing a bell? How about Shasta, a sexy and mysterious woman from the movie Inherent Vice?

Still no? Well, that’s okay, because Katherine (who is the daughter of legendary "Law & Order" star Sam Waterston) will definitely be making a splash in her role in the new Harry Potter film as Tina, AKA Porpentina, a witch who meets up with and eventually marries our main magizoologist Newt as he tries to document mystical creatures for his book. We think she and Eddie will make a really cute pair!

It's interesting to note that, even though Katherine was born in London, she is actually considered an American actress. Fantastic Creatures writer J.K. Rowling has confirmed that not only will part of the new film take place in New York City, but the American version of Hogwarts School of Witchcraft and Wizardry will also be revealed! Where can we sign up??

Get ready, Harry Potter fans, because the adventure has just begun!

In the meantime, you can also catch Katherine in the upcoming Danny Boyle film Steve Jobs as Steve's girlfriend, Chrisann, which hits theatres October 9.