Making Beautiful Music: A Brief History of the Epic Friendship Between Ariana & Nicki! 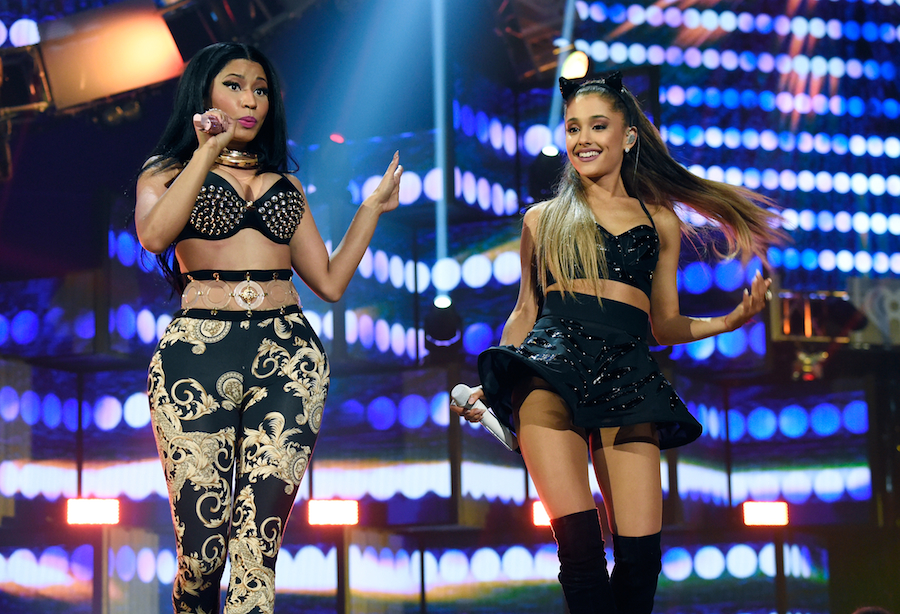 The light has officially come to bring back everything we missed from Ariana Grande and Nicki Minaj’s jam-worthy collabs. In the past couple weeks, we’ve been blessed with two bops from the ladies: “Bed” and “The Light Is Coming”, making a total of five team-ups between the two!

So how did this fabulous friendship come to be? We’re here to breakdown the history of these gal pals we’re all girl crushing on.

Ari and Nicki first met seven years ago at the 53rd Annual Grammy Awards in 2011, where Ariana tweeted a cute pic of the two captioned “Just met @NickiMinaj , she was so kind and down to earth.”

Just met @NickiMinaj , she was so kind and down to earth. http://twitpic.com/3zib9m

In 2014, we finally heard the first musical collab between the two on Nicki’s song “Get On Your Knees.” It wasn’t long after that when the girl bosses teamed up with English powerhouse Jessie J for the ‘14 summer jam “Bang Bang”.

Since then, the two have been known to rock the stage together and jam out in the audience at award shows, too. After the 2016 release of their joint single “Side to Side” from Ariana’s third album, Dangerous Woman, the two brought a beach party to the American Music Awards stage for a live performance.

And the love off stage is just as real for these besties. The two often take to social media to express their appreciation for each other, with Ariana taking to Instagram in May to declare “i love my big sis @nickiminaj so f*ckin much” and Nikki replying “I love my lil sis @ArianaGrande so fkn much.”

I love my lil sis @ArianaGrande so fkn much. https://t.co/GoLkCJdr90

These Billboard chart-toppers are all about the lady love, and you can bet they’ll always have each other’s backs. Both are quick to stand up for each other in the face of adversity or controversy. When Nicki posted a video of them performing at the NBA halftime show in 2016 on her Insta, Ariana was quick to respond to body shamers: “How about we respect each people’s body boundaries and encourage each other to feel like a babe no matter how they are?”

As they build each other up and act as fierce role models of confidence and support for women, both Ariana and Nicki are also spreading their light throughout the world. After the tragic bombing at her concert in Manchester, England, Ariana raised almost $25 million for the families of victims during her “One Love Manchester” concert in June 2017. Following the tragedy, Nicki told TMZ, “Ariana’s my sister. I love her and I love the people of the U.K.” In her own philanthropic efforts, Nicki has taken a stance in support of affordable education. In 2017, she hosted a contest on Twitter which resulted in her paying all educational expenses for over 20 college students.

You can listen to Ariana and Nicki’s hits along with Ariana's full album Sweetener when it’s released on August 17.