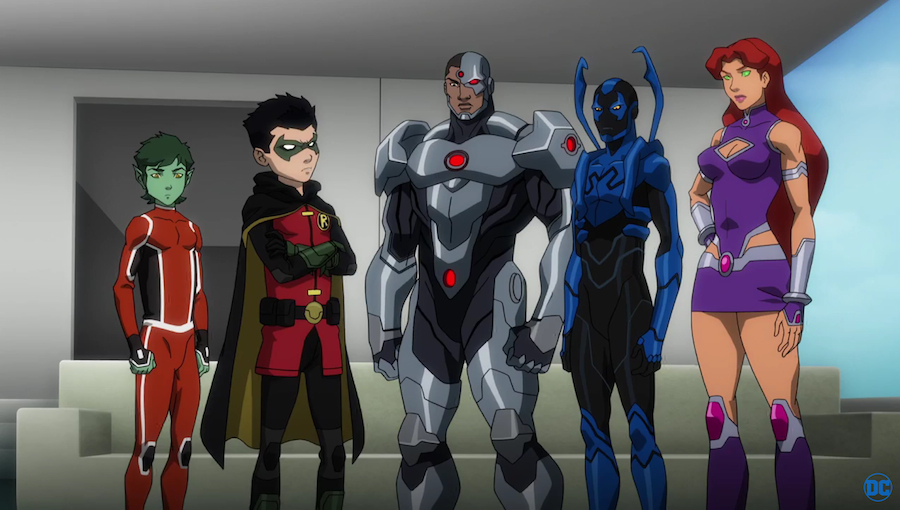 I saw Wonder Woman with a male friend of mine. We laughed, we cried, we left the theater feeling like strong empowered women, but still, DC just isn’t scratching an itch that I have. Sure, we loved the part where Wonder Woman flips a truck over and jumps through a building. That fight on the island? Freaking epic! I LOL’d when she and Chris Pine’s character are about to get down and dirty/ruffle in the sack/roll in the hay because the little girl in the audience who asked her parents, “What’re they doing?” Still, as I said, DC isn’t scratching my itch just yet, and it looks like what they have in store is still leaving out what I want to see most! So before I dance around it any longer, can they please bring in the "Teen Titans" already?!

Thanks to Power Rangers, a completely separate movie, I feel confident that DC could do a Teen Titans film quite well and that it would be received well by fans and critics alike. If you do not know who the Teen Titans are, or were a fan of the cartoon show from the mid-2000s, then it should be noted that the Teen Titans are a bit different now. Being a Justice League character these days and starring in the upcoming film, Cyborg is no longer a member of the Teen Titans and is replaced by a new version of Blue Beetle, who is now in a symbiotic relationship with a blue alien bug creature. While it was never completely confirmed in the show which Robin is leading the Teen Titans, it's thought to be Dick Grayson through a variety of implications. It is confirmed to no longer to be the case today, although Grayson as Nightwing is sometimes an adult mentor, and now the Robin of Teen Titan Bruce Wayne and Talia al Ghul’s son Damian Wayne.

Okay, so for those of you that have no idea what I’m talking about, here is a list of the current core members of the Teen Titans:

Robin – Male, human teen with no special powers but has been trained in the ways of the ninja by the League of Shadows and his grandfather/Bruce Wayne’s former master Ra’s al Ghul since birth.

Starfire -- Adult female, alien leader of the group and with powers similar to Superman’s but can learn languages through kissing, can create and control green fire, and has better hand-to-hand combat skills than Superman. Overall she is stronger and better on maybe technical levels than Superman but is never treated that way.

Blue Beetle – Average, human, male teen who has a blue alien bug creature attached to him, giving him the power of flight, enhanced strength, weapon creation, alien language translation, and can shoot beams/blasts from his hands.

Beast Boy – Human, teen male with green skin born with the abilities of a changeling. He can become any animal he thinks of at any moment and is highly trained in hand-to-hand combat.

Raven – My favorite. She’s a half-human/half-demon hybrid whose father is basically Satan. Raven’s mother agrees to sleep with this demon king so she can give birth to the Anti-Christ because of a cult she joined. Raven’s powers include telekinesis, empathic abilities, flight, astral projection, darkness manipulation, teleportation, better-than-average strength and stamina, overall a lot of magic abilities and, like the rest of the Titans seem to be, highly trained in hand-to-hand combat.

Finally, there is one more member who appears more than some others but isn’t quite a mainstay in the group:

Terra – Human, female teen, as far as I know. She has the ability to control any part of the Earth. For example, she can create earthquakes if she wants, raise the ground to make anything, lift giant masses and hurl them at opponents, float pieces of the ground to grant her flight abilities, create volcanic eruptions and control, or even create lava and magma. The list can go on forever. She’s basically the living embodiment of Minecraft and her creativity is her only limitation/enemy.

So that’s the Teen Titans as they stand now. I can see some people bringing up how Suicide Squad’s problem was too many characters and they tried to jam in too much, which is completely valid. That movie is quite an overstuffed sausage. That was also a different era of DC where they tried to do too much but things might change now. Former Marvel hero Joss Whedon is said to be stepping in as the big creative force for DC. He’s done some awesome stuff and as it stands now has made the best Avengers movie (and the worst one), so if Warner Bros. is smart, they’ll just let ol’ Wheds do his thing and not interfere too much, like he claims Marvel did with Avengers 2. Plus, as I said earlier, Power Rangers came out this year and a lot of people seemed to like it. They introduced us to five new characters in two hours and it worked! We knew who everyone was, and sure it would’ve been nice to get them in their suits and fighting earlier, but they still pulled it off quite well. Who’s to say DC can’t do this with the Teen Titans?

Something that helps prove my point is that DC has already done this very recently in 2016 with the Teen Titans in their critically successful animated universe. The first one of these movies follows Damien Wayne (current Robin) being forced by his father and the rest of the Justice League to join the Teen Titans because he’s too reckless, has an attitude problem, and is a spoiled, sadistic brat. From then on, we’re introduced to the mainstays of the Teen Titans, and the story begins to follow Raven’s origin and the film seamlessly balances its focus between her and Damien. Clocking in at 79 minutes, this first film, entitled Justice League vs. Teen Titans, gives us a clear view on who all of the Teen Titans are and gives a rich, motivated villain. Give Whedon two hours or more and he’ll wipe the floor with this:

They even had a follow-up this year entitled Teen Titans: The Judas Contract. This one was a pretty great sequel if you liked the first. Even if you weren’t sold on it, then you still might be into this. It’s got comedy, cheesiness, and, aside from one kind of rapey scene involving new Titan Terra, the movie is overall fun. This one focuses more on Terra, Beast Boy, Blue Beetle, Starfire, and Nightwing (stepping in as an adult leader) rather than Robin and Raven. There are multiple villains in this working together, and while I think the big bad’s motivations are completely justified, there’s one villain (no spoilers) whom I don’t buy. Watch to see what I mean, but this animated thrill solidifies that, if given a shot in live-action, the Teen Titans will prove to be a welcome addition to what will hopefully become a thriving DC universe:

Lastly, it should be noted that Whedon himself is a huge fan of the X-Men and the character Kitty Pryde in particular. He based his arguably most famous character Buffy Summers from “Buffy the Vampire Slayer” on Kitty. I can’t think of a better fit for Whedon to tackle other than Teen Titans with his focuses geared towards Raven, a character who really never wanted the level of importance placed on her. I’m excited to see what Whedon will bring us going forward and holding my breath he’s got a Teen Titans pitch rattling around that noggin of his!