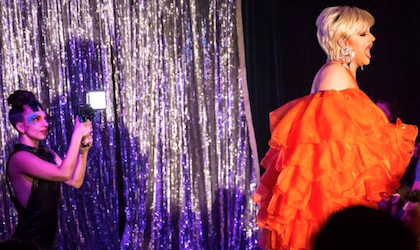 Now here’s something to stand up and clap about!

Straight off the heels of being “forced” to release her first single of her upcoming album ARTPOP after it was “leaked” over the weekend, Lady Gaga set about whipping up a li’l lyric video for it, and to do so, she hit the gay bars in West Hollywood and elicited the help of a few of her closest ladyboys.

In no time at all, the video was completed and posted to Vevo for your viewing pleasure (below). The production values are, well, pretty much what you would expect for a video that went from production to the public within only a couple days, but for fans of “RuPaul’s Drag Race”, we’re willing to overlook those minor details.

The whole thing was shot on a handheld digital camera, primarily by Gaga herself, as she perused popular WeHo nightspots Mickey’s and The Abbey as America’s best drag queens did their thang. Easy to spot are Shangela, Shannel, Detox, Morgan McMichaels, and Willam; there are few others I can’t immediately make out. Oh, and for good measure, someone dressed as Peter Pan. Hmmm…

Anyway, check out the dragstravaganza below, and stay tuned for the Official Video, which will be unleashed on Monday!