Jon Stewart Gets Real in First Trailer for His Film 'Rosewater' 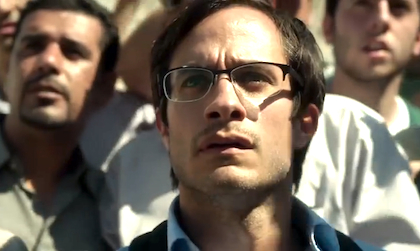 Remember last summer when Jon Stewart took a hiatus from “The Daily Show” and was replaced by John Oliver who did such a rocking job that he now hosts his own show on HBO? Well, the fruits of that absence are now coming to light!

Stewart spent 3 months last year in the Middle East directing a film called Rosewater, an adaptation he wrote of a 2011 book called Then They Came For Me: A Family’s Story of Love, Captivity, and Survival. The book recalls Maziar Bahari’s harrowing experiences as a prisoner in Iran for 118 days in 2009. Prior to his arrest, Bahari had actually appeared in a segment on “The Daily Show” calling out Iran’s government, which led to the country accusing him of conspiring to overthrow the government. So, you can see how Stewart might find this story somewhat personal.

Now the first trailer has been released, and I gotta say, it looks marvelous:

The movie seems to really drive home the power of journalism and the role that social media plays in the major events of the world today… themes that Stewart himself is well aware of. But more than that, it’s about exposing the truth – again, something Stewart does every night on his TV show. He has long dismissed his own participation in the national (and international) dialogue and that he is only a “comedy show”, but quite frankly, his “comedy show” probably does more to expose the public to the truth than most “real news” shows.

Back in the Middle Ages, royalty would have court jesters, and they were the only persons in the entire kingdom who were permitted to poke fun at the monarchs. Nobody took them seriously, and yet they were probably the most truthful people at court. This is probably the same reason “The Daily Show” is so easily dismissed, and yet at the same time able to get away with a lot of things that “real news” shows are not. And in the process, they are allowed to speak truths that no one else dares to. There is definitely power to that, and now we are beginning to see the lines blur between satire and honest news reporting. Jon Stewart is leading that charge, so it’s no surprise to see him helming a project like Rosewater. Huzzah and kudos, Mr. Stewart!

Rosewater premiered at the Telluride Film Festival over the weekend and will be released nationwide on November 7. Go see it!