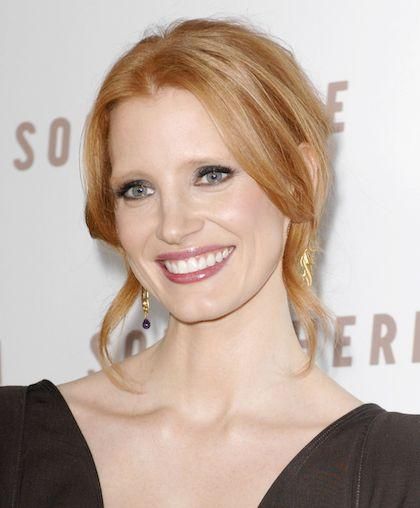 Hollywood's "It" girl of the moment is Juilliard-trained newcomer Jessica Chastain, who has no fewer than three big films this summer and five films this year. First up, she plays Brad Pitt's wife during the 1950s in revered auteur TerrenceMalick's long-anticipated The Tree of Life, which will premiere at the Cannes Film Festival in mid-May and open in the U.S. on May 27.
Next, she has a supporting role in the buzzed-about film adaptation of the recent literary phenomenon The Help, which is set in 1960s Mississippi. The Help stars Emma Stone, Viola Davis, and Bryce Dallas Howard, and opens August 12.
Then, Chastain stars opposite Avatar's Sam Worthington in the espionage thriller The Debt, opening August 31. The two play Mossad secret agents tracking down a Nazi war criminal in East Berlin in 1966. Oscar winner Helen Mirren plays the older version of Chastain's character in the morally complex film, which flashes back and forth between two different time periods.
The up-and-coming Chastain, 30, has been working steadily for years, ever since she got her big break when she was cast by Al Pacino in the title role of his stage production of Oscar Wilde's Salome. Pacino has made a documentary about his staging of the play called Wilde Salome that will open the Venice Film Festival this September. And Chastain has many other films in the pipeline, including Ralph Fiennes' directorial debut, Coriolanus, and the indie drama Take Shelter, which debuted at the Sundance Film Festival in January and is slated for release in October.
It's purely coincidence that several of Chastain's projects are coming out all at once, much like what happened recently with Natalie Portman's six films in six months (Black Swan, No Strings Attached, The Other Woman, Your Highness, Thor, Hesher). The Tree of Life was first expected way back in 2009, but Malick is well-known for his long stretches in the editing room. The Debt played at the Toronto Film Festival last fall, where it received good notices, and Miramax originally scheduled the film to open last December, but its release was put in limbo when Miramax was sold by parent company Disney last year. Focus Features eventually stepped in as the new distributor.
As Chastain told London newspaper The Independent, "I did some of these movies four years ago. My poor mother, I tell her I'm doing a movie with Al Pacino, I'm in a movie with Brad Pitt, she tells all her friends and years go by and the movie doesn't come out, and now she's like, 'erm... I don't know what you're doing in L.A., but you're not doing movies!"