'Inside Out' Puts Pixar Back on the Top of Their Game! 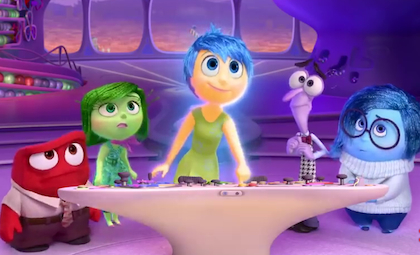 The Summer of 2014 was an amazing time for genre films and one that proved that spectacle and thoughtfulness were not mutually exclusive. Films like Captain America: The Winter Soldier, X-Men: Days of Future Past, Dawn of the Planet of the Apes, Edge of Tomorrow, and Snowpiercer were all excellent action/sci-fi/fantasy/adventure flicks that hammered the point home that there was nothing wrong with paying a little bit of attention to your story while also trying to thrill your audience. We’re still in the midst of our current Summer movie season, and so the jury is still out on whether or not we will have a repeat of last summer’s greatness, but two movies have already come along that deserve just as much, if not more, praise than all of the films mentioned above. The first of those films, and one that will truly stand the test of time, was Mad Max: Fury Road, an action movie that captured the hearts and souls of millions while practically redefining it’s own genre. The second film is one I just recently saw and one that will undoubtedly be making my Top 10 List of films from 2015. I am, of course, talking about Pixar’s latest imagination-fest: Inside Out.

In terms of box-office figures, Jurassic World still rules... the world, and it doesn’t show any signs of stopping unless Universal decides to release another Jurassic Park movie in the coming weeks. But Inside Out is a success story in and of itself, as it grossed $91,000,000 its opening weekend, making it the highest-grossing non-sequel and non-sourced (meaning, didn’t come from a book) film ever. So, in it’s own small way, originality scored a victory in the recent days, and, boy, it sure could use a few of those. A 98% rating on rottentomatoes.com, courtesy of the nation’s critics, didn’t hurt its chances of success either, and while the box office figures and great reviews for Inside Out are something to be celebrated, they are hardly the only reasons why you should be paying attention to Inside Out.

At their very best, Pixar films have always demonstrated a purity of storytelling that can absorb audiences of children and adults alike. With Inside Out (which I think you can definitely include as one of Pixar’s best), you have a sweet and charming tale about a little girl and the tiny figures in her head that represent her emotions. Yes, Joy, Anger, Disgust, Fear, and Sadness are the figures at the helm of Riley’s brain, and their wacky shenanigans at trying to build Riley up as a person through her emotional experiences is a lot of fun and hugely endearing. At the start of the movie, the common belief for guiding Riley through life is that, for every moment, there should be one and only one emotional necessary, which is somewhat true when you are dealing with a toddler I suppose. Joy (voiced by the always hilarious Amy Poehler) sees herself as the leader of this group of emotions, and one that tries to exert her influence over Riley’s life at every possible turn. I mean, who doesn’t want to feel joyful all the time? But as people grow, emotions and feelings become more complex, and as Riley goes through the rough time of moving away from her childhood home, we find out that you can’t always rely on one single emotion to quantify and qualify what you are going through. It is this period of maturity for Riley that send our little heroes on the sweet and crazy adventure that drives most of the film.

As with every Pixar film, the makers started with a simple story and then added the layers of whimsy and imagination to make it something special. In this case, the idea of people in your head is not an entirely new notion. Woody Allen's Everything You Always Wanted to Know About Sex * But Were Afraid to Ask and the creators of '90s sitcom "Herman’s Head" charted that territory long ago. But what makes this movie special is the decision to go even further with this funny concept and to explore the idea of complex emotions, which in turn will make our central characters... well... more complex! This sounds like it might be a little off-putting for a kid’s movie, but Pixar and the emotional beings in Inside Out want to you to know that it’s okay to embrace this, because complex does not necessarily mean bad, boring, or impenetrable. This is pretty much the lesson that Joy learns during her adventures with Sadness, and it’s an excellent lesson indeed.

This is a beautiful, exciting, and funny little movie that is served wonderfully by its spectacle and not dumbed down as a result of it. The reason being is that our initial story is one that makes sense and one that many can empathize with, so the action and spectacle that serve to move it along are not wasted, because we have become invested for reasons that are not entirely aesthetic. And the best thing of all is that what I am describing, in terms of what Inside Out does, is not anything new or complicated at all. It is Storytelling 101, and most of the folks at Pixar bothered to stay awake during that class.

I guess, at the end of the day, I’m rambling on about this animated feature because I’m still somewhat amazed by Pixar’s ability to establish an emotional connection with me that sticks around well after I’ve seen the movie. I look back at Inside Out and I remember the scenes that I laughed at, the scenes that club-punched me in the heart, and the scenes that actually made me reflect on my own life. I had a fantastic time while seeing this movie, and I never once felt the need to turn off my brain and just absorb the pretty colors and loud sounds while allowing my adrenaline to burn off some empty plot calories. If anything, the little emotional people upstairs were working overtime to keep up with this great film. Inside Out is the true gem currently residing in theaters that you should be rushing to, and, for my money, you and your own emotional crew will have a great time. And maybe, just maybe, you and your loved ones might form a core memory or two.

And don't forget to check out YH's adventures at the Inside Our premiere in Hollywood!