In Defense of 'Pirates of the Caribbean: Dead Men Tell No Tales'... 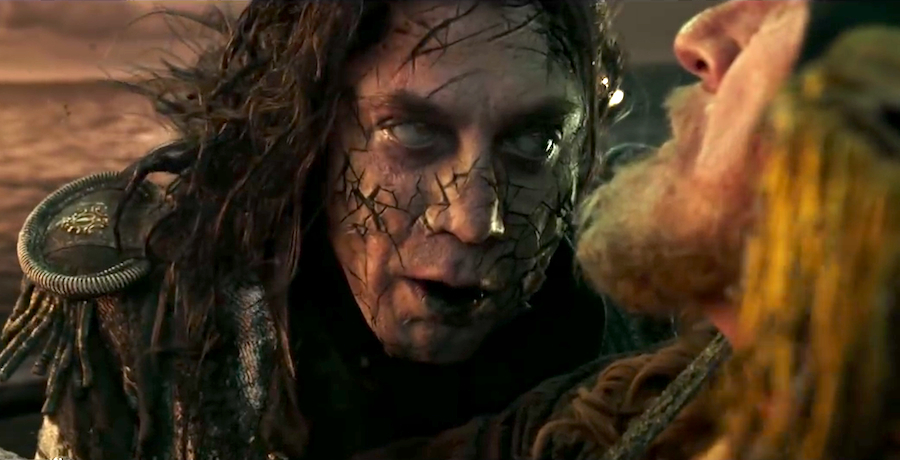 “Dead men may not tells tales, but neither do living ones in this case.”

That is by far by favorite review of the newest addition to the Pirates of the Caribbean franchise, Dead Men Tell No Tales. I love that one due to its clever cheesiness; however, I respectfully disagree with it. This movie was fun, and while we’re at it, I think all of them are fun. (Yarr!!)

Until this year, I hadn’t cared about Pirates too much. I enjoyed the first three when they came out but hadn’t really thought about them since. I never hated them by any means; they just were what they were -- popcorn flare. When the fourth one came out, I had little interest in seeing it, and seeing as though I miss 90% of movies in theaters the past few years (Yarr!! I be cheap!!), I didn’t end up seeing it. Flashforward to now, where my girlfriend is a huge fan of the franchise, and I’ve been on the ride at Disneyland enough times to make up for the lack of a childhood I had, so it was only natural that, leading up to the release of Dead Men Tell No Tales, my girlfriend showed me the first three again, plus the fourth one I never saw, in the weeks leading up to the newest release.

Before diving into Dead Men Tell No Tales, as the beginning of the ride it’s based on at Disneyland has you do, I will say that this franchise gets a bad rap. Ever since the release of The Curse of the Black Pearl, it’s been all down a cyclone critically, and even viewers I’ve spoken to have said they hated the last two. (Argh, everyone be a critic because the internet!!) I honestly don’t get why. These movies are fun. It’s a bunch of drunk pirates going around yelling “Yarr!!” and “Argh!!” while they slash away at mythical creatures. Seriously, what more do you people want? Do you want Jack Sparrow to have an existential crisis over whether a pirate's life truly is for him? Should alcoholism get in the way of his family life, despite the fact his father is the immortal Keith Richards, who, after all the recent death of musicians, proves he will outlive all of us? This isn’t that kind of franchise. It’s there to entertain and be a goofy, swashbuckling good time.

Sorry about that. Anyway, Dead Men Tell No Tales is definitely a movie with flaws, yet once the credits rolled, I turned to my girlfriend and said, “That was flawless.” Then the end credit scene happened and I said, “Give them more money.” But before getting into what was great, let’s talk about what’s not so great. (I will do my best to keep spoiler-free, but be thee warned of spoilers ahoy!) There’s a whole storyline involving an actual witch in this world, because, as established in the past movies, magic is real (all be the will of the corpse of Walt Disney). The British want to use her to track down the main villain of the movie and Jack Sparrow... I think. It’s hard to tell exactly what their intentions are and how they want to use her, because despite the fact I have fun with these movies, they often get confusing plot-wise; it feels like they want to do too much, and as a result it can get tricky when following along. Ultimately, there is little to no payoff with this storyline, and while I didn’t notice or even very much care during my viewing, I had plenty of unanswered questions here afterwards.

What I did like, however, was that my favorite character of the series, Captain Hector Barbosa (played by Geoffrey Rush), was included in all the fun and had quite a huge role. Something about the way Rush plays Barbosa makes me happy. He seems to be the one that’s most into all of the piratey things he gets to do and does the most with it. It’s like as a kid he always wanted to be a pirate and now he gets to be an adult and pretend to be one, so he loves every minute of it onscreen, and it really shows here.

Johnny Depp as Jack Sparrow is also fun to watch, and I know some people probably didn’t like how drunk Sparrow was the whole time, but the man is a hardcore, raging alcoholic. I think it’s brilliant what they did in this one, showing that maybe his brain is being affected by the years of abuse, and while he’s not quite at Ozzy Osbourne-level of perpetual drunkenness, he’s getting quite close. I will say, however, there were times where it just felt like he was along for the ride rather than being an active player in this world, but his introduction scene alone was enough to make up for that to me.

Being a fan of the teen British show “Skins”, I was also happy to see “Skins” actress Kaya Scodelario in this movie. She plays a young woman mistaken for being witch because she’s into science, and that alone got me into it. Of course there would be witch-hunting at this time, but we never saw it before. Scodelario gave a pretty funny performance with some great lines, but really what engaged me was the fact that she was a total rational person in an irrational world having to deal with a bunch of idiots. She’s the straight man of the film, and she surprised me by making it work really well. I’m hoping she can get some more work to showcase such talents after this.

The action in this movie was also quite impressive. There were even times in the movie that felt like they could be their own ride, like when Jack Sparrow nearly gets his head cut off in the beginning by a revolving guillotine. I’ve heard in the past that action scenes in these movies tend to go on too long, and I will agree with that when it comes to the third movie, but here it all seemed quite balanced to me. There’s quite a lot of action but it never seems to go too long and everything going on is completely justified.

Lastly, Oscar-winning actor Javier Bardem makes an appearnace as an undead sea captain out to get Jack Sparrow and achieve his ultimate goal of whiping out the kinds of people he hates most -- pirates. We find out in the movie that he was a huge pirate killer in his day but a young Jack Sparrow outwitted him and trapped him in a hell portal that left him and his crew undead. It’s somewhat similar to the first film, but the captain and crew don’t seem all too into coming back to life or lifting the curse; they only seem to care about killing pirates and exacting revenge on Jack Sparrow for what he did to them. Rehash or not, to me this whole plotline expanded this mythical world even more and brought some new fun to the able with dark twists. Though they seem to cap off all the magic with this one, it still feels like there’s room to grow.

I thought Bardem was great  -- he was funny when he didn’t have to be but was a totally ruthless menace most of the time, killing people just because he wanted to. He makes the movie pretty violent but it’s not his only function. The make-up and special effects team also did a great job with him, and I found his perpetually-waving hair, like he’s underwater even when not, a really nice touch.

Overall, would I recommend seeing Dead Men Tell No Tales? Absolutely! It’s a fun popcorn movie. That’s all it’s meant to be. If you go in looking for anything more or to have a deep philosophical quandary of yours answered, then maybe go watch something by Terrence Malick (a favorite director because I can like popcorn movies and high brow art at the same time… YARR!!), but if you want to be entertained and you like pirates and magic, check out this flick now!