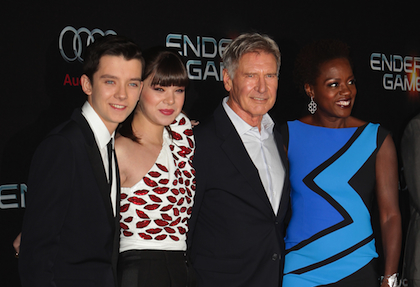 Director Gavin Hood’s sci-fi adventure Ender’s Game had a great opening weekend, raking in $28 million in North America. The film enjoyed an equally strong start overseas, where it opened to $9.1 million (and counting). Other box office hits included Jackass Presents: Bad Grandpa, which grossed $20.1 million over the weekend with $62.1 million in total. The strange little film, starring Johnny Knoxville as an obnoxious senior citizen, has gained a surprisingly large audience (with good reason -- I saw the film and loved how ridiculous it was) and just keeps growing. Last Vegas, which stars Oscar winners Robert De Niro, Morgan Freeman, Michael Douglas, and Kevin Kline as four buddies who head to Vegas (think The Hangover: AARP Edition) also performed well at the box office, bringing in 16.5 million.

Ender’s Game cost $110 million to make and boasts an impressive cast including Asa Butterfield (as Ender), Harrison Ford, Hailee Steinfeld, Viola Davis, Abigail Breslin, and Khylin Rhambo. The film is based on the book by Orson Scott Card, who’s anti-gay comments have caused quite a bit of controversy lately (including boycotts to the film). Card originally wrote the book for adults, although it is primarily marketed as a YA novel. The story takes place in the future, where a boy, Ender, is given the task to stop an alien race from destroying the world.

It’s a bit too soon to tell whether or not Ender’s Game will get a sequel (there are numerous sequels to the book) and how well Ender’s Game will fare next weekend. For the foreseeable future, everything is coming up Ender!

Be sure to check out our interviews with the cast (including my Q&A with Khylin Rhambo):