ICYMI: Michael B. Jordan and Brie Larson Team Up To Fight For Justice In 'Just Mercy' Trailer! 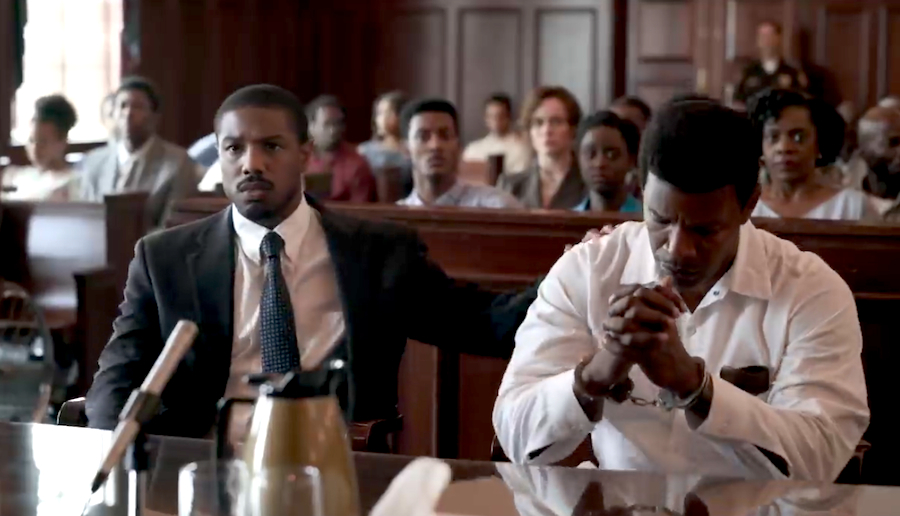 The awards season roster continues to heat up as we quickly approach my favorite time of year. The final months tend to dish out all the films that will be looking for a spot to compete at all the prestigious awards events. So far, 2019 has not disappointed with a slew of powerful pictures that will surely garner several nominations, if not downright wins. But the latest to enter the fray boasts some big names, not to mention a significant moment in history recreated for the silver screen. Just Mercy stars Academy Award winners Brie Larson and Jamie Foxx, as well as Michael B. Jordan, who could very well see that title presented in front of his name in future trailers after all is said and done on this one. From the looks of the promo, this definitely has all the qualifications of being a critical success and Awards Season contender.

Just Mercy is based on the real-life case of one Walter McMillian, an African-American death row inmate who was exonerated in 1993 after being convicted 5 years prior for murder in Alabama. Bryan Stevenson was the founder and executive director of the Equal Justice Initiative, which took on McMillian’s case in 1988. It was Stevenson's first gig as a lawyer, and it was a big one. The narrative centers on the world-renowned civil rights defense attorney as he chronicles his experiences and details the situation of a condemned soul destined for Death Row who should be free. Assisting him in this extraneous endeavor is a local advocate named Eva Ansley. Together they defied the odds and proved McMillan did not kill an 18-year-old girl all those years ago. In a world where discrimination and intolerance run rampant, these brave freedom fighters sought justice in a place where there usually isn't any.

A must see movie. #JustMercy arrives in theaters this December. #TIFF19pic.twitter.com/Z4xiwTBKam

Jordan stars as Stevenson and officially throws his hat into, among many things, the Oscar race. Jordan has showcased in several of his films that he is a powerhouse in front of the camera and is long overdue for some serious recognition. Foxx has taken home a statue before and could very well take home another one for his portrayal of the innocent man McMillian. Ansley is played by Larson, who also has an Oscar somewhere in a room and will definitely make a case for her second statue with her performance in Just Mercy. This compelling and thought-provoking story has three of the game's best, making it a surefire triple threat entering the battlefield for Oscar glory. It also stars Rob Morgan, Tim Blake Nelson, and Rafe Spall to round out the talented class. But not only are the people in front of the camera the makings of an award-winning movie, but the one helming everything behind the scenes is also very seasoned in his craft.

Destin Daniel Cretton will be helming the upcoming Phase 4 MCU film Shang-Chi and the Legend of the Ten Rings. Before he enters the Marvel Cinematic Universe like a few of his actors before him, he will be looking to pull off another hit film. Back in 2013, Cretton was on fire right out of the gate with Short Term 12. The film starred Larsen and was the smash success every director dreams of having on their big debut. While his follow-up The Glass Castle wasn’t as good, it still was a reliable performance from Larsen. Just Mercy marks their third collaboration and could very well be their best one yet. It will be interesting to see if this attempt helps shake off that sophomore slump and brings home a win his third time out. It's starting to look like that may be the case, as the film received high praise from people lucky enough to see it at the Toronto International Film Festival where it premiered on September 6. For those that could make it, have no fear because Just Mercy will open in limited release on December 25.