ICYMI: Meet The Line-up For The All-Athletes Edition of "Dancing With The Stars"! 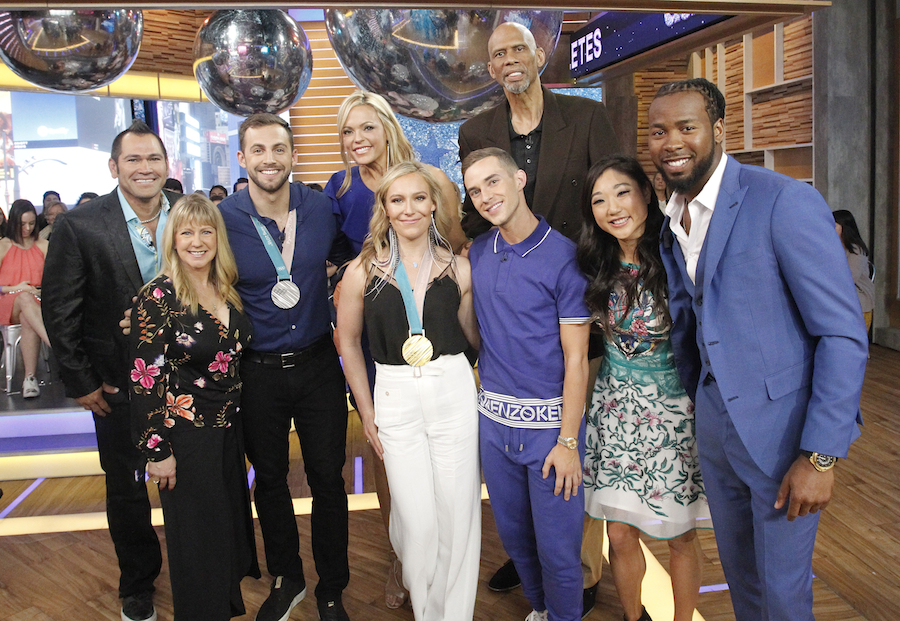 The upcoming 26th season of ABC’s “Dancing with the Stars” is being dedicated to a particular group of celebrities that have done historically well on the show -- athletes! Yep, this upcoming season will exclusively feature big names from the sports world, from Olympians to basketball legends.

Check out the cast details below!

Known for his expressive personality and recent Team Bronze Medal in Figure Skating at the PyeongChang Winter Olympics, Rippon will be dancing with partner Jenna Johnson this season. While his skating was certainly applauded, he was also celebrated for his blunt and open comments about everything from his position as a gay athlete to his, let’s say, extreme distaste against certain figures in the American government. As a skilled athlete with a lovable personality, Rippon is sure to capture hearts on-screen once again!

Living Figure Skating legend and subject of Oscar nominated film I, Tonya, Harding will be joined by pro partner Sasha Farber this season! Her career began at age three when she first picked up skates, won her first competition at five years old, won her first national title at 18, and became the first woman to land the very difficult Triple Axel in a competition. After a court-ordered break from skating following the infamous Nancy Kerrigan scandal, she even took up boxing for a while and found some success there. We're sure she’ll find a way to ace dancing as well!

This basketball legend is known for making NBA history as the league’s all-time leading scorer, six-time NBA champion, and the only 6-time MVP. After his retirement in 1989, Abdul-Jabbar certainly stayed busy as a regular contributor to various national publications, like The Guardian and The Hollywood Reporter, providing commentary on various socio-political topics. He’s also the chairman of his Skyhook Foundation, which brings STEM opportunities to underserved communities, was awarded the Presidential Medal of Freedom by former President Obama, and was appointed as the first African-American to the Citizens Coin Advisory Council (CCAC) in its 100-year history, where he helps decide on all coins that are to be minted in the United States. It looks like dancing is the next step in this busy star’s life, along with pro partner Lindsay Arnold.

Ogunbowale is currently a junior at University of Notre Dame and is a member of the women's basketball team. She has won several awards, including her status as a five-time USA Basketball medalist with four Gold and one Silver. While basketball and dancing are certainly very different fields, Ogunbowale will tackle this new court with pro partner Gleb Savchenko.

Another Figure Skating Olympian will be joining this season alongside partner Alan Bersten. This history-making icon made headlines after becoming one of the youngest figure skaters to win a national title in 2008, earned a spot to represent the U.S. in PyeongChang at the age of 24, and became the first American woman to land the difficult Triple Axel at the Olympics, which greatly helped the U.S. win a Bronze Medal in the Team event. Nagasu will be trading her skates for dancing shoes as she puts her artistry to the test this season!

Mazdzer made history at this year's Olympics as the first-ever American athlete to win a medal in the Men's Single Luge event. Despite his post-athletic career goals of being a financial consultant, he’s currently training with his luge team for his fourth and last Olympic Games in 2022. Well, training for that in addition to his new role as a dancer with partner Witney Carson, that is!

This world-renowned snowboarder will be partnering up with Artem Chigvintsev this season! Anderson is known as one of the top female snowboarders in the world and has had a wild, award-winning career so far. Since she was 15 years old, she made records by winning 15 X Games medals. She also won her first Olympic Gold Medal at the first-ever Slopestyle competition during the 2014 Sochi Olympic Games, and went on to defend her Gold in PyeongChang.

Daigle is a Gold medalist softball player that will be partnering with Keo Motsepe. When the Olympics still had Softball in its Summer games lineup, she and the rest of the U.S. team won Gold at the 2004 Athens Olympic Games, resulting in her status as a Softball icon back in the states. Despite the loss of the sport after the 2008 games, Daigle continues to be a proud ambassador of the game she loves. Here’s hoping that passion will make for an easy transition into the world of dance!

This Major League Baseball star played for 18 seasons before retiring in 2012. In 2009, he joined Babe Ruth as the only full-time player to win World Series rings with both the Red Sox and the Yankees. Since his retirement, he has been active with various charities, including his Johnny Damon Foundation that “provides leadership and growth opportunities for disadvantaged children at risk.” He will be partnering with Emma Slater.

Norman made NFL history in 2016 as the highest-paid cornerback after signing with the Washington Redskins. In addition to his work on the field, he is also a regular on various sports shows, including his role as a weekly analyst for “FOX NFL Kickoff” during the NFL season. His partner is pro Sharna Burgess.

Tune in to the premiere of "Dancing With The Stars: Athletes" on Monday, April 30, 8pm on ABC!