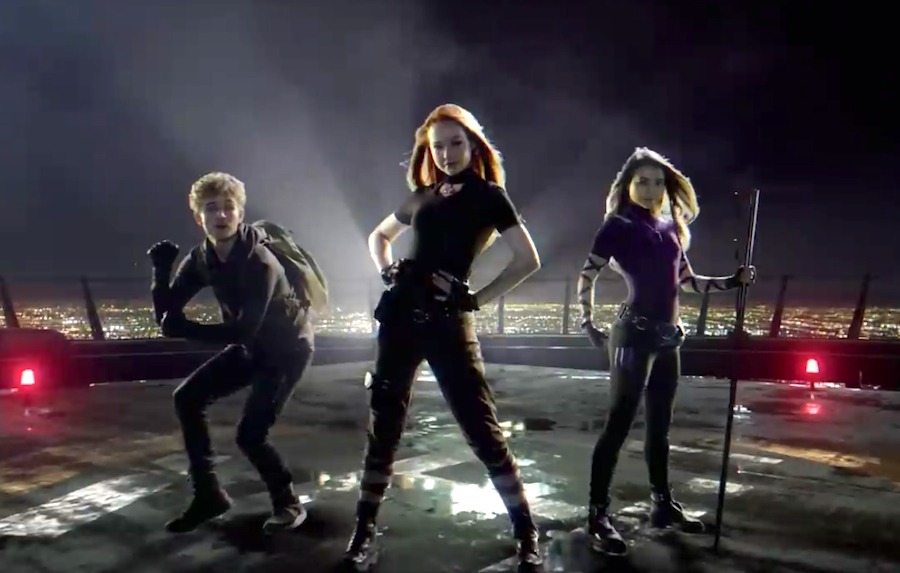 Hello, Disney Channel fans. For those of you that grew up watching the animated “Kim Possible” series, GET. READY. Because a new live-action movie is being made for Disney Channel, and the trailer is EPIC.

From what I can remember of the original series, we never really got an explanation as to how Kim (played by Sadie Stanley) became a crime-fighting teenager. But this DOES get explained in the trailer. “So a few years ago, I accidentally received a distress call. I was done with my homework so… I answered it!” Wait. HOLD UP. Isn’t Kim like… 16? So if she answered the distress call “a few years ago”... wouldn’t she be like… 13? HOW? My mom would have grounded me for life.

We get to see a montage of her doing some super cool action -- cutting a hole into glass with a laser, hanging from ropes, jumping into buildings... DANG she is cool. But no matter how cool she is or how good at crime-fighting she may be, she still has all the struggles of a normal high school student. Like being late to class! C’mon, KP. You can save the world but you can’t get to class on time? DETENTION!

Also, Wade (played by Issac Ryan Brown) is already super cool, and I’m so excited to see him be the badass guy in the chair. What’s the sitch, Wade?

While I’m super sad Dr. Drakken (Todd Stashwick) and Shego (Taylor Ortega) aren’t blue and green like in the series, they still make GREAT villains. And Shego doesn’t seem to miss a beat when fighting Kim.

We also get to see more badass ladies in this trailer. In one clip, it seems that Kim and Ron (Sean Giambrone) are joined by Kim’s mom and Nana, played by Alyson Hannigan and Connie Ray, respectively. And they are straight up CRASHING Dr. Drakken’s party. AND, along with having Ron, Kim ALSO has ANOTHER crime-fighting best friend, Athena (Ciara Wilson).

The most exciting part of all this for me was in the midst of the action montage at the end of the trailer, where we see our favorite Mexican restaurant from the original series, Bueno Nacho!!! From the split second we see of it, it looks JUST like the original animated one. I hope we get some scenes of Kim, Ron, and Athena hanging out there.

While there’s no sign yet of Rufus the naked mole rat appearing in the film, we’re hoping we’ll see even the smallest of cameos when it releases. He was the best in the series, the movie HAS to show him some love? Right? Let’s hope!

Guys, I’m so excited for this movie! I used to run around as a kid pretending I was Kim Possible, so seeing Sadie Stanley run around as Kim Possible and kick some serious butt is SO cool!! I’m also just super stoked that she has some other badass women fighting by her side, like her mom, who’s a brain surgeon, and her grandma, AND her best friend. I can’t wait to see them all in action!