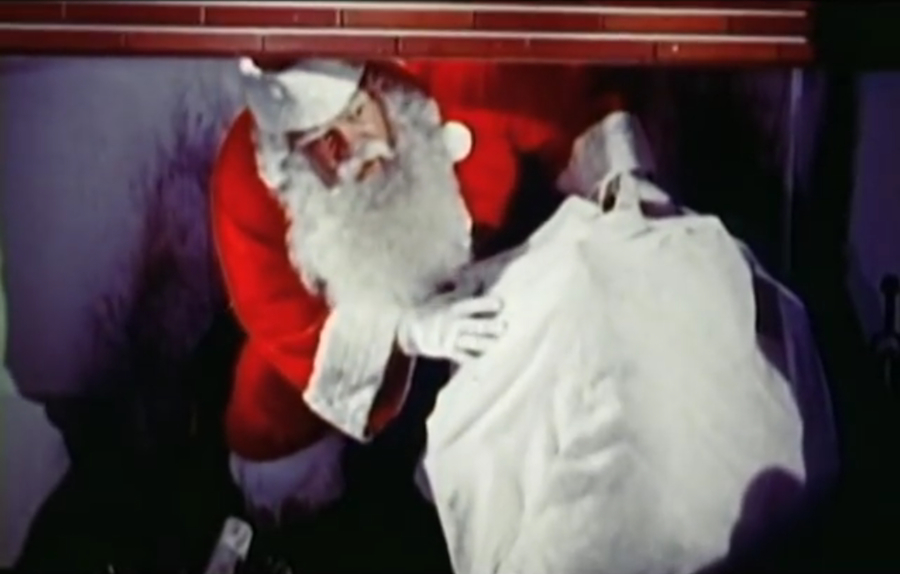 My dear friend Ashley and my boyfriend Paul recommended our next holiday movie, but after watching Santa Claus, I am certain that they have only ever seen the "Mystery Science Theater 3000" take on it. I watched this bizarre atrocity sans the hilarious comments of the MST3k guys, and may I say that this is hands down the strangest film I have ever seen. (And that’s saying something -- I went to arts school, where I was forced to sit through some very strange flashy lights-blaring music-experimental films. And even those made more sense than Santa Claus!)

Santa Claus was directed by Rene Cardona and was released in 1959. This is actually the first foreign film I have reviewed for this column, as Cardona hails from Mexico, and the first Cardona film I have ever seen. Apparently, Cardona also brought us Night of the Bloody Apes, so that was a key fact I tried to keep in mind as I watched Santa Claus. I can’t help but wonder if Cardona’s films all have some sort of strange cult following, as I imagine that there must be people out there who genuinely love this twisted take on St. Nick.

In this tale of Papa Noel, we learn that Santa (Jose Elias Moreno) doesn’t live in the North Pole, but apparently on some miniscule planet off in space. He also lives in a velvet painting, as the backdrop for his planet is so tacky I kept expecting a unicorn to fly across it. As we move into Santa’s palace, which looks as though an Aztec God had thrown-up hideous golden suns everywhere, we learn that Santa is perpetually stoned as he is constantly giggling at nothing, and that his workers are children (likely slave labor) from all over the world. He serenades the children by giggling at the organ, and we are treated to the most warped version of the "It’s a Small World" ride from Disneyland ever made. Being half-Egyptian, I was particularly horrified by the children of the Orient, who apparently hail from the Middle East and includes a 7-year-old belly dancer.

From there, we suddenly switch to Satan’s liar, where apparently all the demons are prima ballerinas. The head demon, Pitch, is sent to Earth where, if he doesn’t get the children of the world to be naughty, he will be sentenced to... eat chocolate ice cream. I couldn’t stop staring at Pitch’s shorts, which seem to be a fusion of red boxing shorts sewn together with leftover scraps of fabric from a junior high school’s production of A Midsummer Night’s Dream. We also learn that rich children are well behaved and have fathers who look like Walt Disney’s non-union equivalent, and that poor children can be more easily tempted into mischief.

Meanwhile, back at Santa’s workshop, where he has since smoked two more blunts (I assume), we learn that Santa spies on all of the world’s children with a “Magic Eye” that looks like a rejected prop from “Pee-Wee’s Playhouse”. In fact, most of Santa’s Peeping Tom contraptions look as though they are rejected props from “Pee-Wee’s Playhouse”. Santa then spies on one poor little girl’s dream (Lupita), which is supposed to be a dream created by Pitch (by blowing on her, btw... gross). This dream, which consists of giant, life-sized human dolls that dance and look ready to murder poor Lupita, are beyond terrifying. No child should ever be subjected to this, or it is guaranteed that they will have nightmares for life.

From this point on, the film completely lost me. Merlin pops up, for some reason, completely dressed in aluminum foil that has been painted blue with stars taped on, and appears to be on even more drugs than Santa. We meet Santa’s reindeer, which are paper-mache creations crafted by Satan himself (OBVIOUSLY), complete with bright scarlet eyes and a smile that says “I am going to eat your soul…” (Weirdly enough, he only has four of them.) We also meet another one of Santa’s workers, whom I like to call Conan O’Brien the Barbarian, who has fake red hair glued to his chest and can make magical keys.

The rest of the film follows Santa completing his mission on Earth, delivering toys (and, in some cases, parents) to all of the good little children. At one point, he winds up in a tree, and at another point makes a topic comment about Sputnik. Santa Claus is by far one of the most bizarre, horrifying Christmas films you will ever see, and for that reason it is totally worth inviting all of your friends over to watch it. There are even more insane moments in the film I didn’t even get to mention, such as the fact that one kid wishes for a cannon and a machine gun. The film is not at all heartwarming, but it is hilarious. I actually think that this may have become one of my favorite Christmas comedies. So in the spirit of the holidays, it is a great film to laugh at with your friends and family!